Better than a Sound Bite; Deeper than an Allegory: Review of Kathy Flann’s GET A GRIP 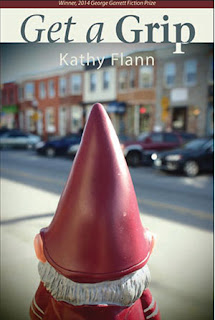 Kathy Flann’s tremendous Get a Grip gives a nuanced portrait of life just south of the Mason-Dixon line. In this collection of short stories, we are privy to the real and often unglamorous lives of Baltimoreans. There is a woman who spends her time buying items from the Shopping Network for the troops. There are two Estonian brothers heading to a basketball interview, their one shot at a different future. There is a woman trying to become an RN, or as she calls it, a “R(eal) N(urse),” hoping those letters would act as “a talisman that permitted only respectable behavior in herself and those around her.” And there is a man who feels disconnected from his wife and his son, RekonDog, a “semi-professional athlete in the Firestorm3 world—with sponsors, a coach, and a group of skinny, long-limbed teen fans enthralled by Rory’s bad-boy tendency to throw equipment and mouth off at officials.”
All of these characters are complex, as though they might walk right off the page and turn out to be the woman you passed on your way to get a cup of coffee at Starbucks or the man screaming obscenities into his cell phone while waiting for the bus. Each character is plagued with problems both within—a fear of taking medication, a tendency to push away the ones they love, an unwillingness to see themselves for who they truly are—and without—sickness, accidents, theft, twists of fate.
“You have been a mother who spent years in darkened rooms, afraid to fill the pain pill prescriptions because of your husband. Maybe he’d steal them. Or worse yet, maybe they’d be as wonderful as they seemed when your husband’s eyes shrank and dilated away into something more blissful than you’d ever known. It scared you how much you wanted to go to that place with him. Better to endure the crush and pulsation of your hand—the pain like something alive, like company.”

Each protagonist has a secret, often revealed through clever back-story that helps contextualize their present dilemma. In a lesser author’s hands, the reveal would be the climax of the story, but Flann deftly uses it to build momentum, moving to a much more satisfying climax, one that allows the catastrophe of events to crescendo with the protagonist’s emotional epiphany.  Whether or not the characters are able to move past their present circumstances and “get a grip,” they all allow us a glimpse into their world, one that is quite different from the carefully constructed news clips meant to terrify and moralize—these stories tell us, bit by aching bit, what it means to be real. (November 2015)

Purchase Get a Grip HERE.

Reviewer bio: Melissa Reddish is the author of The Distance Between Us (Red Bird Chapbooks, 2013) and My Father is an Angry Storm Cloud: Collected Stories (Tailwinds Press, 2015). Her stories, poems, and reviews have appeared in print and online journals. She teaches and directs the Honors Program at Wor-Wic Community College on the Eastern Shore of Maryland. When not writing or teaching, she likes to do stereotypical Eastern Shore things, like eat crabs smothered in Old Bay and take her Black Lab for long walks by the river. Girl & Flame, a hybrid novella, is forthcoming from Conium Press in 2016.