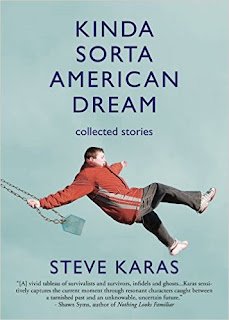 The title of Steve Karas’ collection—Kinda Sorta American Dream—is a verbal shrug, cool and inviting.  Such simplicity in approach and the lack of bombastic stylistic elements may make this collection seem artless. In fact, the opposite is true; these stories are finely tuned gems—nothing 'kinda' or 'sorta' about them. Many of these stories are short, occupying that nebulous space between flash fiction and short story. However, these stories are by no means small; in each compressed space, Karas manages to explore an entire narrative arc, filled with nuance and pathos.
In each story, men and women seek out their own version of the American Dream: a young girl worries about the silence surrounding her Syrian pen pal, Abdo; two parents wrestle with the guardianship of their granddaughter, a girl with a heart defect, while their son struggles with addiction; a man trains as a Santa Claus while battling unemployment and a failing marriage; and a woman mourns the loss of her son by cutting herself. Like the American Dream, a sometimes unrealistic portrait of life’s possibilities, these characters often butt against limitations both within and without. Though their dreams are certainly not unrealistic, they are often beyond the abilities of each character. Most of these stories embody the elements of a classic tragedy: we see the breadth and depth of human existence in each character’s struggle against forces larger than themselves.
In “It Takes a Village,” when Andrew and Gina’s baby boy was delivered, at “six pounds, twelve ounces,” with “ten fingers and ten toes,” they find out he is stillborn: “Hello and goodbye all in one breath.” Later, Andrew drives to the school where he works:

“His Volvo was still crusted with love bugs. After days of baking under the sun, their acid had started leaving pits and etches all over his hood. He had never cared about anything less. He wouldn’t care if they ate through its flesh, down to its bones. If they came back to life and carried it away.”

But within each tragedy nests a small nugget of hope: a wounded bird ready to take flight. And it is in these moments, when characters wrestle through the muck of their lives to reach out and take hold of each other, that we can see the humanity’s transcendence: small moments of grace. (December 2015)

Reviewer bio: Melissa Reddish is the author of The Distance Between Us (Red Bird Chapbooks, 2013) and My Father is an Angry Storm Cloud: Collected Stories (Tailwinds Press, 2015). Her stories, poems, and reviews have appeared in print and online journals. She teaches and directs the Honors Program at Wor-Wic Community College on the Eastern Shore of Maryland. When not writing or teaching, she likes to do stereotypical Eastern Shore things, like eat crabs smothered in Old Bay and take her Black Lab for long walks by the river. Girl & Flame, a hybrid novella, is forthcoming from Conium Press in 2016.