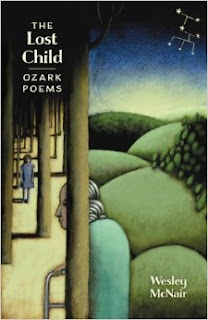 In The Lost Child, Wesley McNair creates the fictional Sykes family of the Ozarks to explore aging, family struggles, and human resilience. These universal themes function through messy, interwoven stories. Characters undergo crises, and they must come to terms with inner turmoil and external hardships. McNair applies his prosodic gifts —including strategic syntax and sharp wit—to create vivid portraits of his characters.
McNair employs dark comedy to explore aging. He includes phrases such as “bald-headed baby brother” and “old rinsed diapers” to show how his characters decline into childlike states (“When She Wouldn’t”). In “The Abduction" McNair describes, with grim humor and vivid imagery, his mother's tendency to hoard:

the knot of used dishrags, the lost can
of macaroni among the empty cans, a stiff rubber
boot that matches its mate — as if when she examines
each rescued object, magnified by her tears,
the past suddenly becomes the present,
and time has not happened to her at all.


This crisis occurs as Ruth no longer possesses the capacity to identify with herself. Ruth takes comfort in discovering old objects around the house, withdrawing into this chaos, unable to know herself in the present.
McNair illuminates family struggles with descriptive portraits. During the Sykes family reunion, “Everybody knew the story of Donna’s mother // so gone to partying and alcohol her face turned a dark / gray color, and some were thinking Donna might / end that way herself” (“The American Flag Cake”). Here, McNair vivifies Donna, a second wife who grows increasingly hopeless over time. Furthermore in “The American Flag Cake,” the author introduces Sissy “who began with a child out of wedlock in high school / and now had two more by a husband who spent his spare time gambling…she had her / own history of sorrow.” While confronting different subjects, McNair's sensitivity to each character's problems exposes hidden selves and secrets.
McNair employs strategic syntax to depict a grieving man grappling with the changes in his life. Here, McNair opens the “Four Point Crown”: “After the car wreck that killed her mother and older sister / Allie’s dad forgot all about the Junior Huntress / Four-Point Crown contest he had signed her up for / and so did Allie.” Allie and her dad must learn to coexist while mourning. By utilizing a dependent clause for the horrific accident, McNair emphasizes Allie's father's new, unfamiliar place in the world. In the same poem, McNair observes that “Mae couldn’t help feeling a little proud she wasn’t / the one who got the stroke, being eighty-seven / and older than her brother Homer.” While depicting these siblings, McNair conveys Mae’s nonchalant attitude towards her brother’s illness and her own unapologetic pride.
McNair’s grim humor allows him to portray an array of characters struggling within a family. The thirteen poems in this narrative sequence will resonate with poetry readers and anyone who has experienced the aging and loss of a parent. (2014)

Reviewer bio: Celine Ridgway is a junior at Penn State University earning her degree in English and French and minoring in Linguistics and International Studies. She hopes to enter the publishing world one day and believes that writing literary reviews will help her do so. She resides in Philadelphia with her family of eight.