Review of Amanda Ackerman’s THE BOOK OF FERAL FLORA 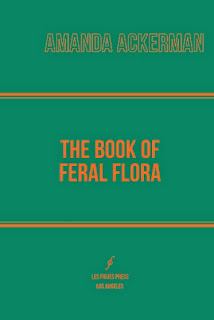 The Book of Feral Flora

I was at first captivated and struck by the title of Amanda Ackerman’s collection. Feral Flora. I imagined stories that were darkly whimsical, tales of wild plants on the hunt perhaps, or poetic explorations juxtaposing the fantastic. Some of the material in The Book of Feral Flora was apparently generated by plants themselves- a concept which I found to be extremely intriguing. Ackerman recorded herself reading her work and then sent it to a programming poet, Dan Richert, who played the recordings for plants. Richert then recorded the responses of the plants, via electrical impulses, and new texts were created from the originals. These ‘plant writings’ make up much of the text pieces compiled in the section “Feral Iridium Animate Matter: flowery uneconomical language” (another title that I love) and the Table of Contents. Ackerman also points out in her Process Notes that while writing the texts meant to be recorded, she interacted with different plants in various somatic ways such as touching or ingesting the plants. In short, Ackerman is not afraid to take wild experimentation to the edge. I admire the way she thinks and have to give her props for committing herself wholeheartedly to the production of the pieces in “Feral Iridium.” Ackerman is clearly a writer who lives and breathes the material she has dedicated herself to.

That being said, The Book of Feral Flora proves problematic. While the concepts are intriguing, the results produced were repetitive and overwhelming.  Many of the pieces in this collection could stand alone brilliantly, but the act of compiling them together creates a morass that quickly encourages a loss of interest. For example, the section titled “Short Stones” juxtaposes a line or two of imagery-laden poetry with a page repeating the names of trees over and over in various patterns. The lines “Erasing its memories of pearly black thoughts and calling this labor. She was being paid.” are paired with “White Willow Ivy Willow Heather…” Though the connective meaning between the two texts escapes me, there is clearly author purpose and intent here. One juxtaposition could give me the incentive to work through the piece to try to find that hidden intent, however this arrangement goes on for seventy-nine pages. The effect becomes mind-numbing and all desire to find meaning is lost.
There are a few ‘more conventional’ pieces in The Book of Feral Flora and I did enjoy the first part of the story “One Heart Is Better Than No Heart: emerging buds” in which the archetypal Hansel and Gretel story is examined and reimagined. I say first part, though, because the story repeats itself. As in, all eight pages are reprinted. The problem with this repetition is the same found in “Short Stones”: repetition serving a purpose is one thing, but here it feels like artifice.
Perhaps this type of work is just not for me. In finishing The Book of Feral Flora, I felt as if I had missed something. As if the pieces had not quite connected. I suspect that hardcore fans of experimental literature would argue with me here, and I hope they do. I hope that intrepid readers can find the meaning in Ackerman’s book as she intends it to be found. I hope that this collection finds its way into the hands of readers who appreciate Ackerman’s conceptual forms and ambitious experiments with communication. There is definitely something here- I’m just not sure what it is. (July 2015)