Local but not: Review of Troy James Weaver’s Witchita Stories 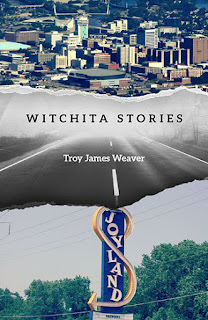 Reading Witchita Stories, Troy James Weaver’s debut collection, is like being a cage fighter and getting punched in the face. It hurts, sure, but that’s what you’re there for—to be hurt. You like it and you want more. Witchita Stories hurts, and it hurts in the best way possible.

The collection follows the narrator in a series of interconnected vignettes as he grows up in Wichita, Kansas. The boredom of flyover country is compounded by drug and alcohol abuse that is intended, at times, to try and counter the aforementioned boredom. People do stupid things to combat the oppressive melancholy and they pay for it. His brother goes to jail. People die. The narrator, though, continues on, taking everything in as he attempts to make sense of everything going on around him.

Weaver’s prose fluctuates between declarative and stark and teenage-revelatory. At times, the narrator calls it like he sees it, “[His dad] works third shift, his secrets seem numerous, and when he’s at home he’s just a soft squishy surface in front of the television.” At other times, Weaver’s narrator pushes into the psyche, attempting to draw as much from the cards he’s been dealt as possible, “…then I stood there, the lone, watching sweat drip from their earlobes, wondering whose heart would be the first to collapse beneath the weight of the god-awful boredom of this place.” These two styles are balanced nicely throughout.

There is also as much going on related to pop culture as there is anything else. These cultural markers serve as much to save the narrator from boredom as they do to place him in a greater conversation—wherever he is, even if it is Wichita, Kansas—he’s going to experience life as many others will. Every teen of this generation knows who the Fonz is and every teen, at one point or another, knew the words to Vanilla Ice’s one hit song.  Anyone who grew up in similar circumstances knows “What We Talk about When We Talk About Love” (here “What We Talk About When We Talk About Joyland”). Around these events there will be incredible highs and abysmal lows, even if he doesn’t connect that others like him are experiencing the same things all across the country and the world.

Witchita Stories is the Project Mayhem of the plains region and Weaver is the Tyler Durden of this project. He grabs onto the narrator’s struggle to survive amongst chaos, and the melancholy of living no place special, and he does not let go. This is a coming-of-age book that plainly shows the damages suffered from growing up. (April 2015)