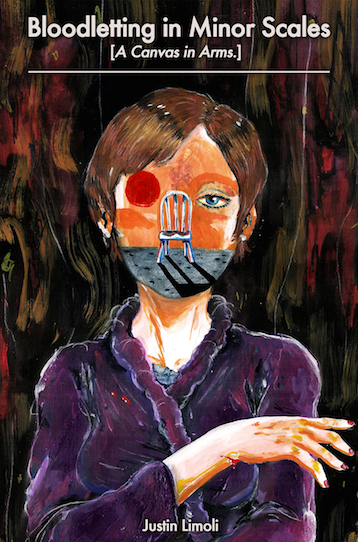 By its own definition a play in verse has to work on at least two levels. Justin Limoli’s Bloodletting in Minor Scales [A Canvas in Arms.] has almost as many levels as it does an abundance of characters. To appreciate this book in all its bizarre glory is to read it multiple times. There is simply too much here for a single read. There are too many characters, investigations, secrets and tributes which lurk between the lines and within the shadows cast by the building sense of drama within the first read.

Suicide:  My name is Suicide, and this is a greeting. My name is Suicide
repeatedly. My suicide was a naming, and I am here to tell you
something. My name in robes is Suicide. I stole a color with a
naming. In brush strokes, there is a swifting breath of suicide.
You might be wondering why this is all relevant? I can assure
you that my name is Suicide and there is relevance in brush
strokes. A happening will occur, but I am not omnipotent. I
am Suicide, and for this act, that means everything.
(Page 10)
It is a play in its own right, with plot, characters, stage direction and so forth while also standing its ground as an intelligent, provocative and sometimes unsettling work of poetry. The reader only has to get as far as the character list, which includes Blood, Sonnet, Dante, Godot, Cupboard and Cloaked Epiphany as some of its players, to realise that this play in verse has ambitions way beyond the ordinary.

Surpassing unique, this is a daringly original piece of multi-layered theatre which predominantly concerns itself with loss; more specifically the threat of loss. Essentially, Bloodletting is a convoluted work of deconstruction. Limoli not only strips his protagonist, layer by layer, of all he knows, he also dissects and pokes around the inner workings of the form in which he writes. He dismantles the traditions within poetic form by breaking the rules of writing as only one who understands them can. With a mixture of contemporary style and structured form, alongside altered form that spills over its own borders, the writing itself almost becomes yet another personality.

By characterising the theatre, its stage, its audience, its furniture and its history, Limoli dissects the play in hand along with the form in which it is written into interrelating parts that his narrator wrestles with throughout the play.

It’s fitting that the book begins with the mother’s unsuccessful suicide attempt, being that the maternal relationship is the foundation on which all relationships are built. The mother’s failed suicide throws everything our narrator knows into question right at the genesis of the play.  For practical reasons a sharp little blade would typically be used for the slitting of ones wrists. A small and precise cut for the desired effect. So perhaps the suicide by cleaver that sets the play in motion was doomed to fail from the start. Rather than focusing on the grim act, Limoli is more interested in the much darker characteristics within the destructive personality. Dealing with a loved ones suicide is one thing, coming to terms with a failed suicide is a whole other can of worms. After all, a failed suicide is to live, which leaves our narrator with the impossible task of mourning the living. And how does one mourn the living? Ultimately that is the question our narrator is forced to ask, and so the play begins.

The unwilling central character is forced by the play and its parts to establish a plot and bring it to some kind of conclusion. Armed only with unanswerable questions and insurmountable concerns he tries to navigate his way through an impossible array of emotions as he faces the task of deciphering who or what is guilty and where to appropriate blame.

Seeing this play on the stage would be a completely different experience to reading it as a work of poetry. This complex take on life, death and the fine line between the two will appeal neither to the reader or spectator who prefers neatly packaged narrative, plot and clear cut eight-point arcs. That’s not to say that the play is a mess of nonsense. Far from being messy or nonsensical, Bloodletting is as fascinating a read as it is a challenging one. Contrary to the unfortunate and sometimes brutal events within this avant-garde play, Bloodletting in Minor Scales is a gracefully written work of poetry and a risky piece of experimental theatre. (December 2014)

Reviewer bio: Matthew J. Hall is an avid reader, writer and reviewer of fiction and poetry. His latest chapbook, Pigeons and Peace Doves, is due out June 2015 (Blood Pudding Press). Find out more about Matthew, his writing and writing he appreciates at www.screamingwithbrevity.com.