Review of Sam Slaughter’s WHEN YOU CROSS THAT LINE 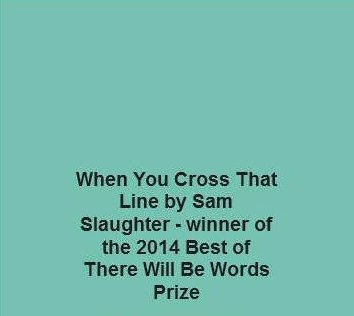 When You Cross That Line

Sam Slaughter. There Will Be Words, $5 chapbook

Stories are meant to be told, even the weird and gritty ones. The ones with unhappy endings. The stories collected in Sam Slaughter’s chapbook, When You Cross That Line, are the kind of stories you find being told in rundown bars and on long road trips. They are the kind of stories that make you think twice about what you just read or heard. They deserve repeating.
Sam Slaughter’s fiction isn’t a place for the fulfilled. Everyone is in constant motion, in search of something. His characters are always in some sort of transition phase, with subtle hints of a deeper history, but at the same time, naïve enough to head into the dark alleys that we refuse to look at. In this regard, his story hooks are a finely sharpened tool for this author’s tool box. Used well, his hooks vary from story to story. Whether it’s the protagonist’s curiosity in “When You Cross That Line” or the snowball of reactions in “Neighborhood Watch,” you feel compelled to continue on. It’s not out of the realm of possibility for his characters to cross that line between safety and danger.

His characters constantly explore things, for better or worse. You can’t say that Slaughter’s characters linger. They move forward, at the risk of themselves and those around them. Friend comes over to tell you about his new “security?” Opening his trunk leads to a fairly gruesome treat. Getting an apartment in a shady part of town? Be ready for the neighbors. Old man selling gators at a roadside store? What could possible go wrong here? This old man in “When You Cross That line” does his best to sell these alligators he has but there’s an undercurrent that he’s pushing something else. Maybe he isn’t selling as much as he’s pushing something away. Maybe it’s his hope. The setting in “When You Cross That Line” has an odd yet familiar feel to it, his location an updated locale between Flannery O’Connor country and Denis Johnson’s underbelly of Americana filled with desperation and out of touch optimism. This is true for all five stories of the chapbook.
It’s fitting that Slaughter’s chapbook is a product of There Will Be Words, a reading series based in Florida. Slaughter has a way about him that makes a reader feel eerily comfortable and yet at the same time utterly shocked at the turns he can make once you’re hooked into the story. Sometimes, simply getting a beer for a friend will lead you to a conversation you weren’t prepared for. Sometimes your new neighbors are a bit much to handle. Sometimes (I imagine always) bears make really crappy security pets. But the hunger for hope in Slaughter’s characters is undeniable. They may not be the best, but they are enough. You may not feel good about being in Slaughter’s world, but you will think more about the cracks in the sidewalk of our society, the page six stories we easily overlook. (May 2015)

Purchase When You Cross That Line HERE.

Reviewer bio: Nick Sweeney's book reviews can be found at the Atticus Review, the Summerset Review, and the Heavy Feather Review.