Now It is Time to Wake: Review of Jonathan Harper’s DAYDREAMERS 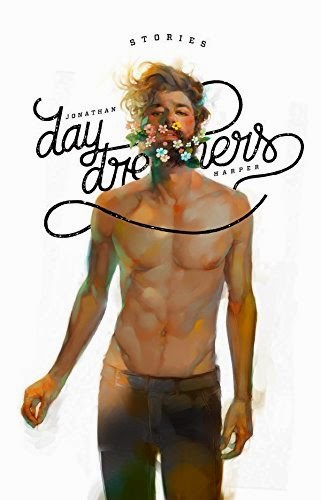 In the inimitable Gilmore Girls, Lorelai Gilmore is born into a life of wealth and privilege, a life of strict rules and etiquette, a life that she finds suffocating.  At age 16, she becomes pregnant, and her parents plan out her future: She and Christopher will get married.  Christopher will work for Lorelai’s father, Richard.  Lorelai will raise a daughter in a stifling house with stifling rules.  Not knowing where she is going or what she ultimately wants, only what she doesn’t want, Lorelai runs away.  She settles in the small town of Stars Hollow and raises her daughter Rory alone, creating a life of pop tarts and coffee and wacky but loyal friends, a job first managing and then owning a small Inn, and finally, even a relationship with Luke Danes, the diner owner.
This was the series I returned to while reading Jonathan Harper’s collection of short stories: Daydreamers.  The characters in these stories often don’t know what they want, but they are clear on what they don’t: they don’t want a house full of hovering Aunts, they don’t want a twin bed in “a frilly pink hell with floral wallpaper and Precious Moments figurines,” they don’t want a life of religious structure and persecution, they don’t want to be merely houseboys.  What they do actually want, though, is a bit more shadowy: a half-remembered dream covered in mist.  Like so many of us, these characters wander through life, hoping to stumble head-first into meaning.
This desire for a bodily transformation, a transcending of the mundane, often leads these young men into gnawing obsessions that reveal the body at its most vulnerable.  In “Nature,” August becomes enamored with body modifications and suspensions.  In “The Bloated Woman,” Jeremiah finds a dead woman on the beach who haunts his thoughts.  The unnamed narrator of “Costume Dramas” fixates on his husband’s new tenant, and in a furious attempt to reconcile a fractured marriage, demands a violent and intimate reckoning of the body.

“Spank me,” I said.  He gave me a light slap on my backside, weak and frightened of itself.  I crouched up on all fours.  “Do it again, but hard.”  He struck; it barely stung.  “Hurt me.  With your belt.”

Often, in the search for transcendence, these young men find only atrophy.  Jeremiah spends his summer taking care of an old philosophy professor, one with whom he had an affair, now suffering from dementia.  Randal sees a future of “endless nights on the patio, surrounded by unhappy workers… drinking away their frustrations,” like Winston, whose eyes are “gray as ash, puffy with long crow’s feet” or the women with “phlegm-filled laughs.”  Before Grant begins a graduate program at Penn State, he visits Lunch Copeland, a man whose house is filled with empty birdcages and young boys.

“Years ago, Lunch had been Grant’s Sunday School teacher and confidant.  Back then, he had near mythic qualities: a sort of suburban Viking, the kind of childhood guardian only found in children’s books.  Now he looked old and bloated; his once wavy hair was thinning out.  His neck drooped into sagging folds that would need scaffolding to fix.”

In the end, many of these young men find a moment of grace, but as in Flannery O’Connor’s stories, these moments are small and transitory; they will not last.  Still, like Lorelai Gilmore, we care for these young men, and we hope that they will avoid the sand traps and bottomless pits spread out before them, that eventually they will find their way.

“The pool shocked him with coldness…He floated on his back, bringing himself to perfect stillness.  Time moved very slowly in the dark.  There was much left to do: finish his classes at the tech school, earn a living, eventually find his own place.  His shoulder blade still felt tender, a small ache but no pain.  It felt like a subtle tapping, a reminder that he’d been daydreaming way too long.  This is what it must feel like: the weightless sensation, the quiet drifting, only a sharp, subtle reminder that the ground was still nearby.”

Reviewer bio: Melissa Reddish is the author of The Distance Between Us (Red Bird Chapbooks, 2013) and My Father is an Angry Storm Cloud: Collected Stories (Tailwinds Press, forthcoming 2015).  Her stories, poems, and reviews have appeared in print and online journals.  She teaches and directs the Honors Program at Wor-Wic Community College on the Eastern Shore of Maryland.  When not writing or teaching, she likes to do stereotypical Eastern Shore things, like eat crabs smothered in Old Bay and take her Black Lab for long walks by the river.