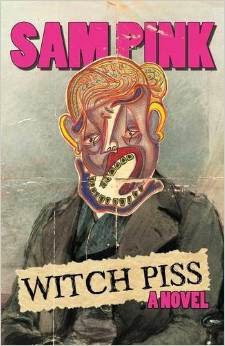 Imagine, if you will, a Shakespeare play dedicated entirely to the gravediggers in Hamlet. The interesting part about the Bard’s comic characters — not only the gravediggers, but Lear’s fool and the underappreciated Autolycus — is that they are smarter and more honest than their neighbors of higher social standing. Sharp wits and true souls, always taking the piss out of the upper-class twits around them. Sam Pink’s characters share the same qualities. He’s as obsessed with the down-and-out as Shakespeare was and James Kelman is. So much so that Pink devotes all of Witch Piss to the homeless and destitute of Chicago. They’re addicts and drunks and sinners and thieves. Most are a bit off their rocker. Like Shakespeare’s fools, insanity is part of the package. But they make no apologies. Nor do they operate under any delusions. Pink cares enough about the characters to show them at face value and not romanticize anything. Sometimes they’re extremely funny, other times sad and self-destructive. Denizens like Spider-Man (who is so named for the obvious reason that he tries to dress like Spider Man) and his girlfriend Janet come across not as clichés but living breathing complex human beings. Anyone who lives in a large city knows them well.

While Witch Piss doesn’t boast a plot, it still grabs you. The big draw is Pink’s use of language. It’s downright lyrical, percussive, and sharp. Even when writing in dialects or broken and slurred english, he finds a poetic flow to the characters’ voices. While not having a story per se would hamstring some authors, Pink turns the novel into the equivalent of a photo essay. Each chapter is a snapshot of a group of locals doing exactly what they do on any other day, laid out in Pink’s high-contrast delivery. The narrator, who is present in the story, but essential only as a recorder of events, is shoved to the side. Here and there he utters a platitude or two, from which we can tell that he is as lost as the others. In many ways, he finds his humanity by joining their circle. But the spotlight is not on him. For some this may strike a sore point, but it’s the smarter choice. The narrator really is a stand-in for the reader. Pink smartly keeps the focus on people like Spider-Man who naturally have more interesting things to tell us about human beings. The reader can’t help but get caught up in their stories. Sometimes there is a point, sometimes not. Sometimes it’s really funny. And at other times, the reality of their situations throws a gut punch. In the end, Pink never drags the novel down to a sordid level. Nor does he sugar coat anything. Like life itself, Witch Piss is funny and sad, often at the same time. (February 2014)