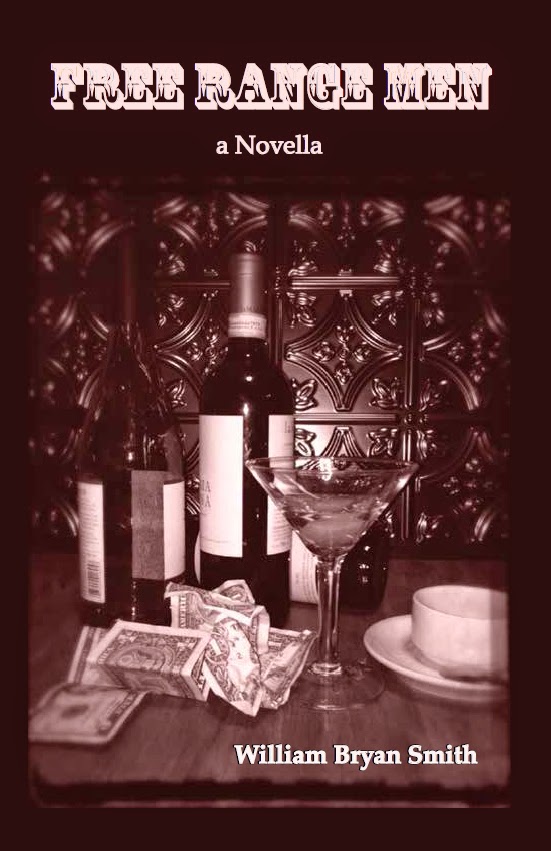 Free Range Men is a modern day tragicomedy set in home-town Pennsylvania. William Bryan Smith burrows into the heart of bad choices and their consequences in this well-crafted piece of literary fiction.

T. J. Beckerman is an adjunct professor embittered by the slow demise of his marriage and struggling to accept his recent divorce. Vocally he insists on a deep-seated hatred for his unfaithful ex, however, in his quieter moments we are privy to his true feelings.

"I like to remember her this way: the kiss in the snow outside of the deli on Ferguson Street (which is now an accountant’s office); the night we finished the bottle of Chablis and I read my failed novel to her; the pride I felt in her as she lay exhausted in her hospital bed after the birth of our son."
(From Ch 4 Pg 43)

Deep down he wants nothing more than to fix his family unit and go back to being his son's hero and his wife's confidant. In a misplaced effort toward compensating for all he has lost Beckerman seeks out solace in all the wrong places, the results of which range from mild discomfort to irreversible depredations.  Unable to let go of the past, he makes one bad decision after another with disastrous consequences. The majority of his time is spent in the company of two drinking buddies, Lyon and Donnelly, who are at least as self-destructive as Beckerman. Particularly in the case of Donnelly, a muscle-bound, steroid-pumped womaniser whose inability to accept reality results in a restraining order and a spell in the psych ward.

Lyon may be the more level headed of Beckerman's friends, but he is busy hopping from one meaningless physical encounter to the next in an effort to block out his own loss of love. All the relationships in this wistful tale are either in tatters or doomed to fail. Free Range Men is not so much a story of lost love as much as it is a story of learning how to live, or perhaps how not to live, in the aftermath of rejection.

"There's nothing left to say. We stare out into the darkness, out into the nothing, as if the answer lies out there, just beyond our reach."
(From Ch 2 Pg 26)

Smith writes with a haunting sadness which he balances out perfectly with cynical humour and sarcastic wit. In one of Berckerman's many reminiscences we hear one of Donnelly's childhood anecdotes involving a real-life mail-order monkey, blood, deception and death; which is as moving as it is hilarious and leads on to one of the novellas most sobering portions where the passing of Beckerman's beloved dog represents the breakdown in a twelve year marriage.

Various people come and go along the way, all with their own emotional baggage. None more so than Lyon's sister. In and out of rehab, Penny is the most obviously screwed up of Smith's characters and as such shows the well-intended and unguarded side of our protagonist.

"...I want to forget that she's my best friend's sister, that she leads a questionable lifestyle - that she's an addict. It feels good to be wanted by someone; it helps that she is lovely and vulnerable. For a moment, I fool myself into believing I can save her."
(From Ch 5 Pg 56)

A colleague in similar dire straits recommends a wholly unethical scheme for a professor of English to make a few extra bucks. And so, bit by bit, T. J. Beckerman rids himself of his last shreds of integrity until there is little left but shame and regret. It's safe to say that Beckerman's questionable decisions are at their most devastating within his professional role and subsequently lead him to not only question his position as a trusted faculty member but also as a human being.

Smith is an exceptional storyteller who expertly develops his characters with equally loathsome and endearing qualities. For all of Beckerman's flaws he is never portrayed as a bad guy. In fact, in spite of their darker moments, all of the story's main players are not only likeable but on a painfully human level they are intrinsically familiar and easy to relate to.

Several literary giants are acknowledged throughout the text. This can be a risky business for a writer as it leads the reader to draw comparisons when considering the author's style of prose. However, William Bryan smith writes with an excellent measure of brevity and a remarkably well executed use of dark humour. This reader would happily place Free Range Men on the top row of his bookshelf alongside books by his own literary giants. (September 2014)