Review of Christian Winn’s NAKED ME 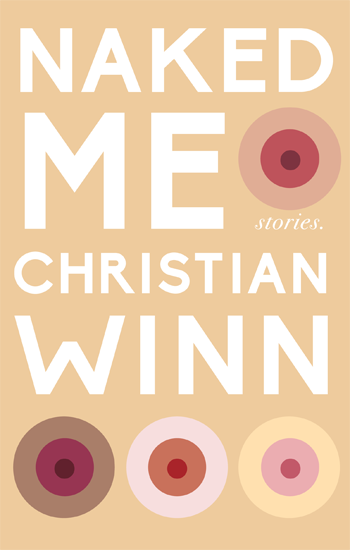 Fair weather reader I, rarely does a season pass without my readying to give up on the short story collection. It’s too much an insider’s genre, I tell myself, meant for the MFA community and a few zip codes in Manhattan, Madison or Multnomah County. However, like Michael Corleone with the mob in Godfather III, every time I think I’m out, story collections pull me back in.

To be sure, 2014 has been a year of tremendous collections: George Singleton’s Stray Decorum, Claudia Smith’s Quarry Light, Adam Wilson’s What’s Important  Is Feeling, Lauren Becker’s If I Would Leave Myself Behind, to name a few. A quick look at some of the publishers of these titles, Dzanc, Magic Helicopter, and Curbside Splendor (a label I call home), might make evident that a reason for this surplus of good story collections is the rise of savvy small presses. Which makes sense: Who better to step into the breach than operations with two or ten people on the staff, all equally devoted to the book as art object and ice axe for the frozen soul. Every indie reader has her list, but whether your fave is Two Dollar Radio, Civil Coping Mechanisms or Publishing Genius, I suggest you add Dock Street Press out of Seattle, and what better way to get familiar with them than their second title, Naked Me, by Christian Winn.

Before Naked Me arrived at my house I hadn’t heard of the press, hadn’t read any work by its author, which created for me a very rare experience of utter novelty. From the book’s handsome production—and brazen placement of images of nipples on the cover—to the fifteen stories within, I found myself charmed and charged up to be far more aware of both Dock Street Press and Christian Winn in the future. As its back cover touts and its fiction foregrounds Winn’s penchant for dealing with characters on the fringes, bedeviled by bad jobs and bad choices, drugs, drink, and other vices, inevitable comparisons might be made to Carver, Tobias Wolff, Denis Johnson, and Willy Vlautin. Such comparisons seem even more appropriate in the light of the common settings of many of the stories: the Pacific Northwest and the Inland West. Yet Winn’s work shows more than a hint of originality; he’s keen to claim territories both emotional and geographical as his own. To wit, many of the central characters are not locals; they’ve left behind places for this grim and gloomy section of the lower forty eight, hopeful for renewal but wary, often to a fault. Take Stephen in “Mr. Formal,” who arrives in Boise with his philosophy professor father from San Jose, after “things broke down nasty.” Or Tompkins in “Rough Cut,” who left Seattle with his mother after “his father left them when he moved south and away four years ago.” That many of his characters still have opportunities to make choices that might elevate them from past calamities infuses a sense of optimism in the stories, releasing them from the occasional grim determinism found in fictions set in this region.

What’s more, Winn manufactures terrific atmosphere and setting, rendering worlds through deft detail that conjure up vivid backdrops to the urgent dramas faced by his central characters. In “Rough Cut,” “the summer creek runs slow and murky,” where in “False History,” “this desert valley lolls and dips in patchy shades of brown.”   He’s equally adept in some of the stories set in California, able always to find both the strange in the familiar and vice versa, thus establishing that sense crucial to story that Jim Thompson once offered:  that “nothing is as it seems.”

Most significant, though, to me, in Naked Me, is Winn’s formal exploration. One senses that Winn’s wanting to find forms for his fictions that avoid formula. Most of the time he does this exceptionally well, handling first and third person narrators ably, manipulating time through past tense’s retrospection and present tense’s shocks. Interspersed throughout the collection’s longer stories are a series of flash fictions or vignettes and none seemed alike; all possessed an integrity of form that warranted their length, prevented them from seeming like false starts or empty exercises in mood. And the longer stories demonstrate attempts to create tension and suspense apart from plot alone. The title story’s bravura ending hinges on a smart shift in tense and narrative angle—the narrator telling us mostly what he did not say—and in “Rough Cut,” a similar move to future tense makes even more aching the present action. An occasional misfire occurs from time to time—I wanted the wonderful cataloguing of dead celebrities  in “All Her Famous Dead” to mean more about whom the central character is—but in the main, Winn seems sure with his devices, adept with artifice. Never does the technique overshadow the very real men and women with which he populates these stories.

In the main, Naked Me offers proof that the short story collection isn’t as much on life support as we fear: it’s still a fine showcase for a writer, like Winn, testing his strengths against the limits imposed by the forms he embraces. Is this collection serving as a laboratory for a novel? Who knows. Winn seems a writer we’ll always be wanting to hear from, no matter what kind of fiction he fashions, for he has in Naked Me made that crucial discovery: that the key to most readers’ hearts and minds is not telling them what they’ve never heard, but finding ways to make the most humble, the most familiar seem limitless in what they can share. (July 2014)

Reviewer bio: Tom Williams is author of two works of fiction, The Mimic’s Own Voice and Don’t Start Me Talkin’. His collection of stories, Among the Wild Mulattos and Other Tales, is forthcoming from Texas Review Press in 2015.