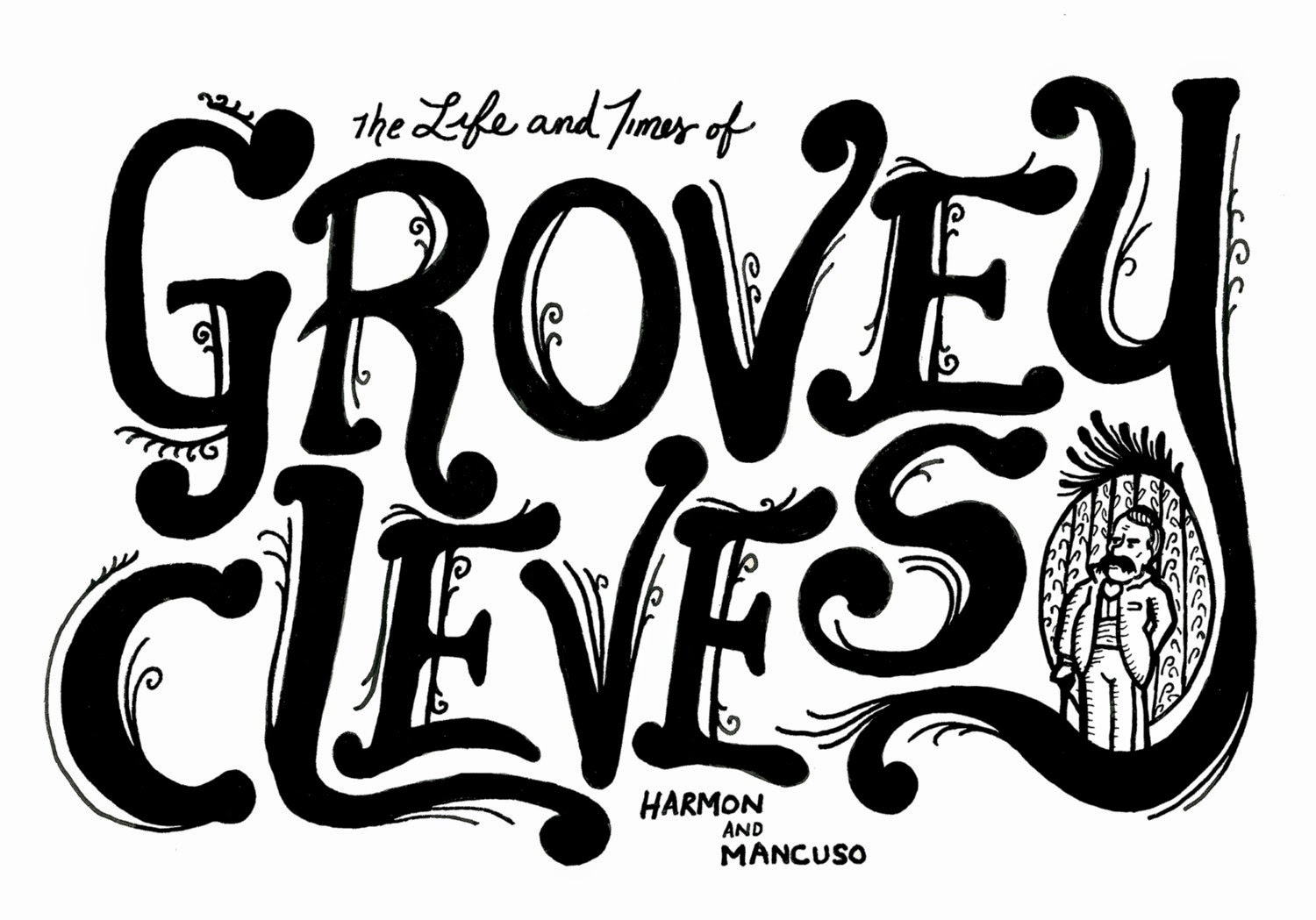 The Life and Times of Grovey Cleves

Grover Cleveland may seem like an odd choice for anything: a play, a movie, a song, an illustrated book of fiction, but for Scott Mancuso and Mickey Harmon the choice couldn’t be more appropriate. They both reside in Buffalo, New York, a place where the presence of Grover Cleveland is tangible. The former president has had all manner of things named after him, including a now defunct hospital, a park, a golf course, and a couple streets. There’s also a statue of the man at City Hall. But I would not classify The Life and Times of Grovey Cleves as a biography.

In fact the book doesn’t appear to claim a genre, which adds to the mystery of just how much accurate history we're going to get, or how much we should expect.

On the surface it does read like a children’s biography of the 22nd and 24th POTUS, but the writing, and as I’ll get to later, the art, builds toward something darker and more complex, often using levity. Cleveland's name for instance is changed to the funnier Grovey Cleves of the Caldwell, New Jersey Cleves (Cleveland's actual hometown). A consistent metaphor throughout the book refers to Grovey's light, which exists inside of him, is filled up by the sun, and is responsible for his drive and energy. This light serves as a way for Mancuso to negotiate Grovey's determination to become adored, known, and successful in his lifetime.

Mancuso's deftness with the narrative is at its best when he is exploring the aspects of existence most children's books tend to avoid. In Chapter Two Grovey is made sheriff of Erie County and puts to death two prisoners by hanging. Mancuso's treatment of death and its effects on Grovey is especially notable:

“Grovey kept his hand on the lever that had held the trap door in place between John Gaffney and not John Gaffney. Not John Gaffney and not Patrick Morrissey were part of Grovey now because he had pulled the lever and he had turned the people into not people and their souls had to go somewhere. Grovey felt them in his chest like he was three people now (William had said he was starting to look like three people now) and they harnessed the light howling inside of him and told him to move, move, move because it was only going to get darker.”

The book is a true collaboration, however; each page contains both text and a drawing. If you are not familiar with Harmon's art outside of this book, your time would be well spent seeking it out. It often depicts Buffalo architecture with a thick-lined style, cartoon-like and pleasantly proportioned, often with vibrant color. The art in the book makes strong use of whimsy yet manages not to avoid the more tragic images of the story. There is a somber feel to characters’ expressions that lends the book a certain quietude. And instead of making the book feel quiet, it makes it feel odd and a little offbeat. The book didn't make me imagine true events alongside it as so many biographical books do. Instead I imagined a strange analog to our world, a black and white place of broad lines, full of pain and opportunity and light and history. If only one of the halves of this book, either the writing or the art, was effective it would be worth the read, but because both are creative, strange, and affecting, we are left with a fun and beautiful take on a president who never seemed so interesting. (March 2014)

Reviewer bio: Brian Mihok's work has appeared or is forthcoming in Rain Taxi, Everyday Genius, 1913, and Fast Company. His debut novel, The Quantum Manual of Style, was published by Aqueous Books in 2013. He is editor of matchbook, a literary journal of indeterminate prose, and associate editor at sunnyoutside press. He lives in New York City where he makes videos and takes pictures.