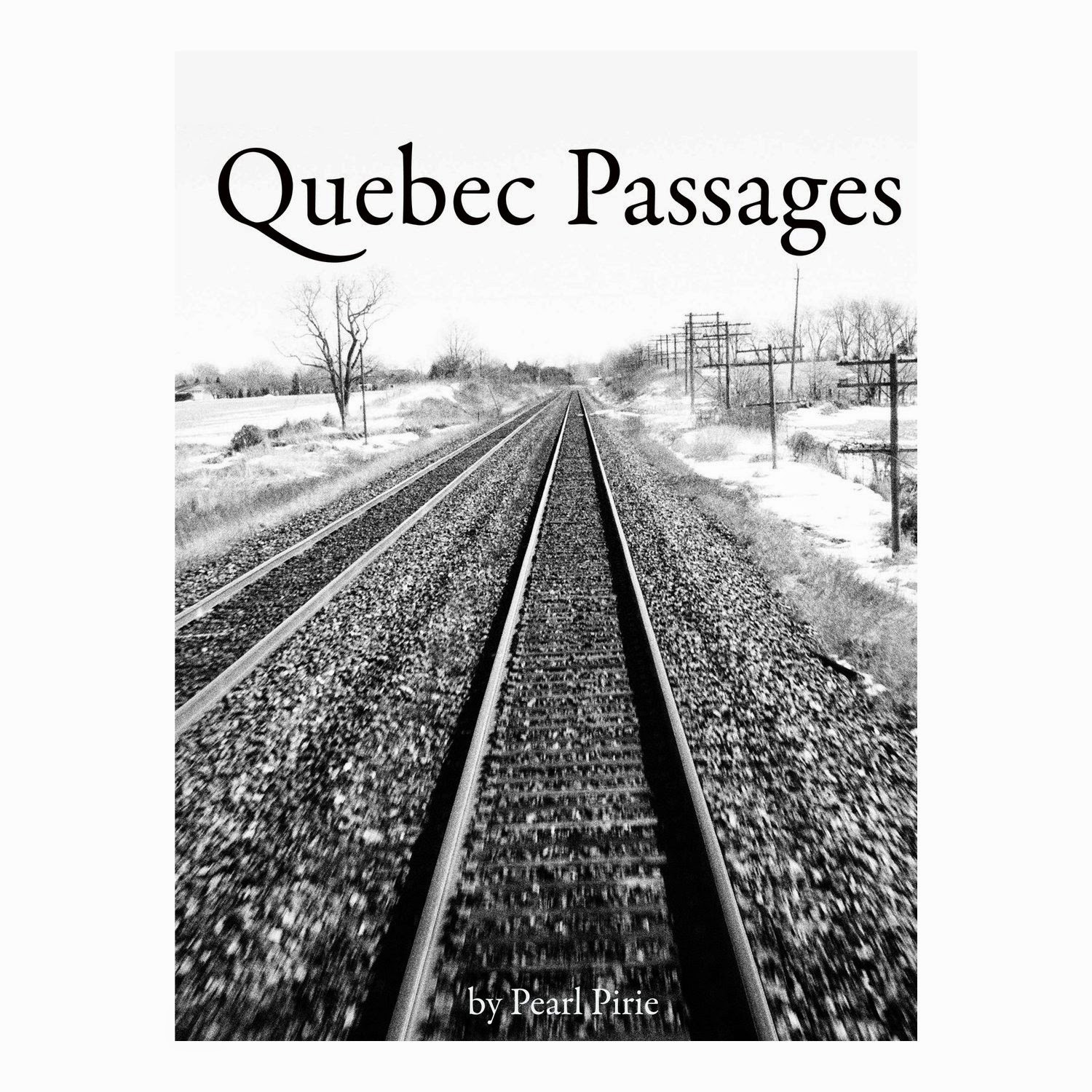 as a traveling companion

the blank page
could do better

sure, it flatteringly
wants to let me
talk about me

but discloses
not a half-note
about itself

Existing as something between the chapbook and the trade collection is Ottawa poet, publisher and blogger Pearl Pirie’s Quebec Passages, a self-published follow-up to an earlier collection of self-described “train poems,” between stations (Obvious Epiphanies Press, 2011). The author of numerous chapbooks and two trade poetry collections—been shed bore (Chaudiere Books, 2010) and Thirsts (Snare Books, 2011), winner the 2011 Robert Kroetsch Award for Innovative Poetry—Pirie is also the author of a forthcoming third trade collection, pet radish, shrunken, scheduled to appear with BookThug in Spring 2015. Part of the appeal of following Pirie’s work over the past few years has always been in not entirely knowing where her work might go next, shifting between narrative forms into more traditional engagements with haiku as well as more experimental forms of language and visual poetry, playing constantly with different shapes and possible sounds. Certainly, not all of her attempts have been successful, but those that are far outweigh the ones that aren’t, and through her curiosity, her work manages to accomplish a series of unexpected moments and startling, even jarring, images. The fact of her exploration and unevenness reminds me about what jwcurry once suggested about the late Toronto poet bpNichol, that he wasn’t a great poet because everything he wrote or published was great, but that he was willing to try everything. Simply for the fact that he was fearless enough in his work that he was willing to fail; and through that, he managed to accomplish things in his work that hadn’t even been attempted before.

not a drunk, with many a sniggering jest.
for hours I haven’t been asked

for change, bus tickets, a smile. no
crack-heads no off-meds. shoulders soften.

not a single child with an ear-infection
nor cat pleading utterly cruelly starved.

not even an unanswered ring of
telemarketer. have we outrun the food chain?

in quiet like this one could believe
in omens. or be susceptible to beauty.

A number of the poems that make up Quebec Passages give a sense of sketch quickness, as though wanting to get as much down on paper as possible in a kind of note-form, skimming across a far larger canvas merely suggested by what she has written down. In many places, meaning is superseded by the play of sounds, allowing her words to simply bounce off each other, connecting her lyrical dots as much by bouncing sound off and across what the words might actually say. There is such a lovely sing-song quality to a number of these pieces as Pirie utilizes a variety of information, including historical, observational and personal, to craft a sequence of lyric exploratory sketches composed during and around rail travel. Might the poems here and in between stations be part of a singular manuscript that might see trade publication down the road, or is this something continuous and ongoing, a project that might see multiple loosely-connected published iterations over an extended period of years? “[O]r through the eyes is to go thru / a very small aperture,” she writes, to open the poem “to fall in love through the ear,” “to slip in under the skin, / for a filarial worm, living is loving / is backwashing from the kiss / of mosquitoes into a person [.]” Further in the collection, the poem “a country untouched” begins:

by civil war on our soil we are the peacekeepers except for Oka, and squirmishes and wars before the Iroquois Confederacy and deportation from Acadie and forced relocation to English homes of natives and the children from Ireland made into slaves and 2012 with twenty-three people shot on Danzig in east Scarborough and fourteen who died in 1989 at École Polytechnique, and police reported 121 incidents of impaired driving causing death in 2011, and the small violences of shortened longevity by tetanus 2005-2011 is 3 so forget that, measles 750 in 2011 but no death, unnecessary grief, what else for the fret machinery? Smoking is responsible for 16.6 per cent of all deaths in Canada. But