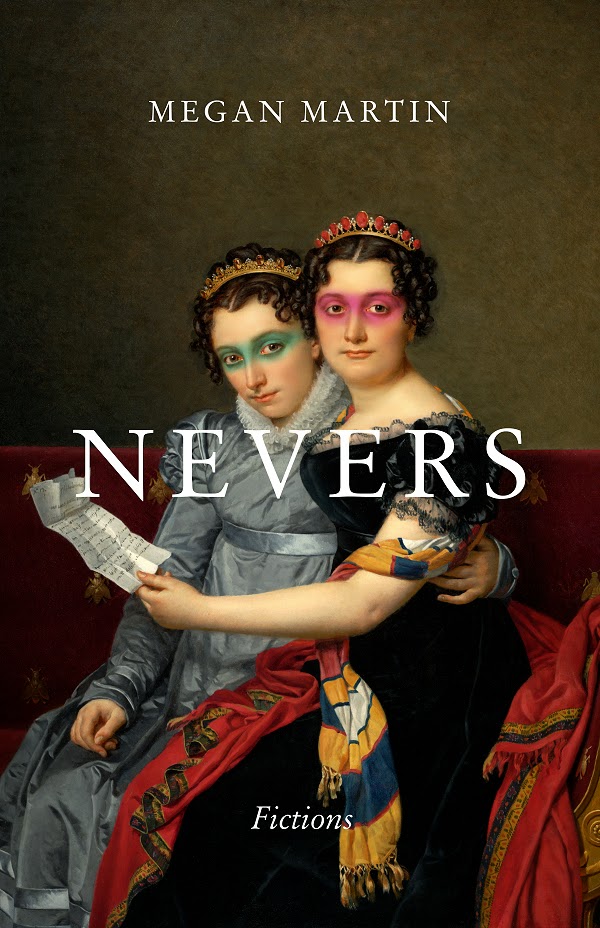 Every character in Nevers is having a better time than the narrators.  And everyone, according to these narrators, is an asshole.  Megan Martin’s collection is comprised of shorts of almost uniform length and uniform theme.  Each is voiced by a narrator who has had enough.

A complaining narrator who is writing about writing might sound like a recipe for disaster.  But Martin manages to break the rules by keeping it surprising.  Love and writing find themselves in worlds of fantasy: robot foxes, a bride walking down the aisle in a breast hat, one narrator stuck in a hot tub full of academics, or “all humanity’s worst failures and wickedness.”

Martin saves unlikable narrators from being abandoned by the reader by adding vulnerability, even as the narrators try to hide it.  One who, in jealousy of another writer, hopes to “inspire a suicide in a perfect stranger,” but “writing feels like simultaneously stabbing and being stabbed.”

The reader can see the humanity beneath the defense mechanisms.  One narrator may say, “Shit, I hate when the narrator is a writer,” but also, “I only write because I want to talk about myself all the time.  And also because I cannot tell you to your face that I love you furiously when I imagine you in dreams…”  When talking to a cat about art and her perceived failure at art, another narrator says, “‘Cat…sometimes I want to move out to the woods alone and let all the meaning out of me and not care that I have no meaning anymore.’”

Many times, the cynic breaks to become tender, as in the story of a stuffed cat named Fifi that a childhood narrator toted around at a garage sale.  The adults lovingly told her that Fifi looked just like a real cat, and it’s not until much later that she realizes her “charmed and delusional existence.”

And Martin manages to break the rules with humor.  I found myself laughing at every twist of language or direction in the book, and there are many twists.

Readers won’t find a traditional narrative in Nevers.  They won’t find a climactic build of stories that seek to find answers to jealousy or creative failure.  What they will find are micro-fictions like potato chips.  Read one and the next thing they know, they’ve read the whole book. (May 2014)