Review of Monika Zobel’s AN INSTRUMENT FOR LEAVING 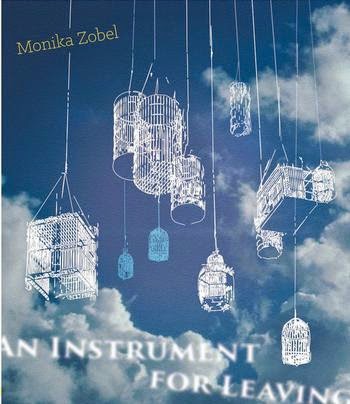 AN INSTRUMENT FOR LEAVING

An Instrument for Leaving is full of trains.  Fittingly, Monika Zobel’s collection, which won the 2013 Slope Editions Book Prize, is filled with poems of travel, transience, and otherness.  The book deals with translation not only of language, but translation on a personal level.  Rather than telling these stories directly, as in an essay, Zobel describes the ineffable through imagination and language.  The book is equal parts play, terror, and loneliness.

The poems are about what is, but more importantly, about what is not.  They are poems of instruction and poems in conversation, spliced together between italicized and un-italicized lines. Imagination takes over—what if a you and an I lived inside a coat pocket—leading to beautifully terrifying worlds such as a birthplace where, “With each new death the magistrate erects/stop signs on footpaths.  Soon school children/won’t arrive for their pickling lessons/on time.”  Zobel also offers poems of family, the hardest part of leaving and returning: “Only I know how/to untangle the static.  I cut/ the navel of our birthplace//while fish freeze into/winter sleep.”

There are so many surprising turns of phrase (“I lived two bus stops/from forgiveness”), new metaphors (“The ocean always responded/ with rejection letters”), and unlikely verbs (“Dried leaves motorcycle/in our lungs”).  The titles set the scene and keep us interested: “The Immigrant Searches the Map for Countries Larger Than His Palm,” and “Tell the Villagers You Have Returned as Translation.”  But the poems don’t always lead the way we expect.  Zobel captures so much of what the A Instrument for Leaving does in her poem “Hear it Whistling,” when she writes:

Explain to an environmentalist
what language does
to us, what it feels like
to float between two
languages.  Begin with
magma and end at ice caps.

Purchase An Instrument for Leaving HERE.