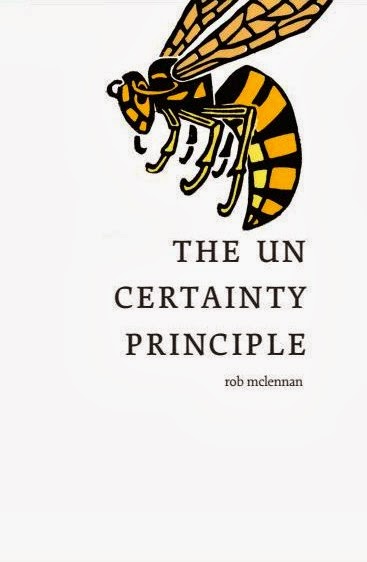 For those of you not acquainted with quantum mechanics, the Oxford dictionary defines the uncertainty principle as “the principle that the momentum and position of a particle cannot both be precisely determined at the same time.” In other words, the more exactly the position is calculated, the less determinable the momentum, and vice versa.

Hmmn? Interesting conundrum and a fitting title for poet and micropublisher rob mclennan’s latest collection of “tiny” prose.  While one struggles to categorize the pieces—not exactly flash, not exactly prose poem—there is an equally sneaking sense of a deeper emotional life tucked amongst musings on Michael Hutchinson and the coveted Stanley cup.

In an interview with author and fellow Canadian Jessica Kluthe, mclennan states that the work was shaped by an encounter with American writer Sarah Manguso’s collection,  Hard to Admit and Harder to Escape, which similarly employs a half-page, single-paragraph form for its stories, but that in his manuscript, he “deliberately kept no sense of order”.

This disjointedness gives the book the feeling of a late-night dive into digital culture, and, in fact, several of the pieces were taken from his Twitter experiments with the Jon-Stewart-inspired hashtag #IDontHaveFactsToBackThisUp.

One of the more thought provoking of these—“Pee-Wee Herman was first created using secret Soviet stealth tech; it’s why we’ve barely seen him since. #IDontHaveFactsToBackThisUp”—is a perfect example of his cheeky, Canadian humor.

Speaking of which, listen to what he has to say about an 80’s cult favorite:

For years I’d a theory about the film The Lost
Boys (1987), that  vehicle for Corey heart-
throbs Haim and Feldman. Forget the kick-ass
soundtrack, forget the coloured lights, forget
Canadian  actor  Kiefer  Sutherland  in  leather,
fangs and spiked hair, soaring over the beach.
It  was  the  grandfather,  played  rugged,  warm
and  soft-hearted  by  Barnard  Hughes,  who
crashed  through  at  the  end,  pushing  two
stakes that would kill the head vampire, turn-
ing  the  tables  and  saving  the  narrative. Did
anyone catch it? The bottles of thick dark liq-
uid,  his  “root  beer”  that  no  one  allowed, his
unexplained absence through most of the film,
his collection of taxidermy? Even the fact that
his daughter thought him dead at the offset,
when their lost car arrived, the old man lying,
sprawled out, on day-lit porch. How else could
you explain any of this, but for the fact he was
a  vampire  too?  The  two  Coreys  were  just  so
much  smokescreen.  Even  the  grandfather’s
last line, “all the damned vampires.” It wasn’t
that the town had vampires at all, but citing
foul excess. Was he one of the saved, or was he
including himself?

This passage is typical of the wise-ass style he uses in addressing such topics as Ms. Pac-Man and Vanilla Ice, but this (sometimes brilliant) borderline spoof is not all that this collection has to offer.  Remember that deeper emotional vein I was speaking of?

Well every so often, mclennan injects something personal, like this little doozie:

By the time I entered my teens, our mother’s
hospital  stays  had  lengthened,  from  weeks
into months. So much, in fact, there was a part
of me resentful for the periods she returned. I
had begun to appreciate the solitude an empty
house  allowed  against  how  restrictive  it  felt
once she came home. We walked on eggshells,
the  expression  goes,  suggesting  a  delicate
situation,  on  the  edge  of  danger  or  ruin.
Instead, we bled. We walked around the house
on broken glass.

And you see the talent under the mask.

I sincerely look forward to digging into more of his work. In the meantime, I will be pouring over the glittery pretties to be found on his blog. I suggest that you visit as well. Perhaps we will both stumble upon the beginnings of his next book. (June 2014)