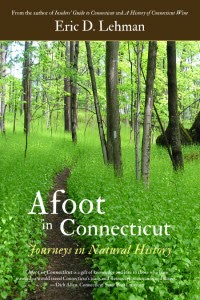 “Connecticut is often the most overlooked of the New England states,” admits Eric D. Lehman in Afoot in Connecticut, his latest homage to the adopted land of P.T. Barnum and Mark Twain. “Other states have higher mountains, grander beaches, more famous cities. Other states in the area have become famous, while we seem to linger in relative obscurity, caught between the city-pinchers of Boston and New York.” But through a decades-long series of more or less successful hikes across the beaches, mountains, and omnipresent country roads of his chosen home, the Pennsylvania transplant discovers a unique spiritual and physical grandeur throbbing amidst seemingly modest surroundings.

Equal parts travel writing and autobiography, the book follows Lehman from his first teaching job in the New Haven area and the breakup with his college girlfriend, through years of mostly solitary ramblings, en route to the chance encounter with the woman who will become his wife and beyond, skirting “the faint tracks of the future.” Subscribing to the belief that one must step outside and walk in order to familiarize oneself with a new place, he sets out to cover as much of Connecticut’s surprisingly diverse ecosystems – the Long Island Sound shore, the reclaimed forests of the eastern hills, the tobacco farms and sloping rock formations of the Connecticut River Valley, a short stretch of the Appalachian trail amidst the endless greenery of Litchfield County – and returning, more often than not, with a life-affirming sense of completion, of having been less than a mile from the suburban sprawl and escaping into a beautiful wilderness. And though he goes at great lengths to glorify the nature he encounters – the shadow of a deer and a glimpse of the fawn she’s trying to protect, spooky but breath-catching glacial remains that conjure images of a giant’s fist, firelight on a dune in Indian Summer – he injects less than flattering doses of contemporary reality into the poetry of his heart. Admittedly a professor and a writer before an outdoorsman, Lehman often chooses to eat gas station food, Subway, and Dunkin’ Donuts instead of the more nutritious fare in his pack, finds himself unable to avoid the sidewalks, parking lots and too-manicured lawns that dissect his beloved trails and need for solitude, and succumbs – especially on his first aborted attempt to cross the entire state on foot – to the debilitating foot blisters of the neophyte. While imparting his failures with such candor is refreshing and makes Lehman a very relatable narrator, it also speaks to one of his most salient points, that being able to fully appreciate the natural world is difficult, yet still accessible with a little practice and careful planning, and in the end, that initial difficulty is what makes the journey’s finish line all the more satisfying.

Possessed with a historian’s curiosity, Lehman adds an unexpected and welcome depth to Afoot in Connecticut by meditating on the loss of what once was and that which will soon be gone. Walking along Long Island Sound, he reflects on the days of five-foot-long lobsters and the now-extinct passenger pigeon. He hikes by caves that served as hiding spots for anti-monarchist judges in the seventeenth century. He frequently quotes long-departed naturalists like Henry David Thoreau and John Burroughs. These connections to earlier eras are an invaluable reminder of the time bridge that hiking creates, the need to preserve what we have left, and the urgency of seeing important but unrecoverable relics before they’ve vanished entirely: “This was it – the fabled road that George Washington traveled on…No stone walls, no dikes, no trace of its proud history remained. Perhaps it was better preserved elsewhere. But here it was disappearing into the timber like a sad ghost.”

I was initially a bit disappointed that Afoot in Connecticut contained no maps diagramming some of Lehman’s longer hikes because even as a native of the Nutmeg state I was unfamiliar with many of the places he meticulously describes and the exact trajectory of the routes he takes. But by the book’s last page it becomes clear that geographic coordinates (easily searchable on Google Maps) are less important than the collection of transformative moments that make up each new expedition, the catharsis and a feeling of connectedness to a deep past that can be attained simply by being quietly present on any path, new or old:

“The wind and birds may whisper to us the mightiest of secrets. We will take a walk by moonlight along a dry stream-bed, over a distant hill seen all our lives. The ancient track will intensify our memories, opening tired eyes to subtle movements and events. Only then can we become part of the great silences of nature in which we tread.”

Lehman has succeeded in crafting a moving, intricate ode to the inextricable bonds that bind person and place, a book that is, at its heart, a call to those who have not yet forsaken the sterility of the indoors for the soul-quenching of a good walking stick and a nearby trail, and a reminder for those who have already traveled to find a greater journey. (May 2013)