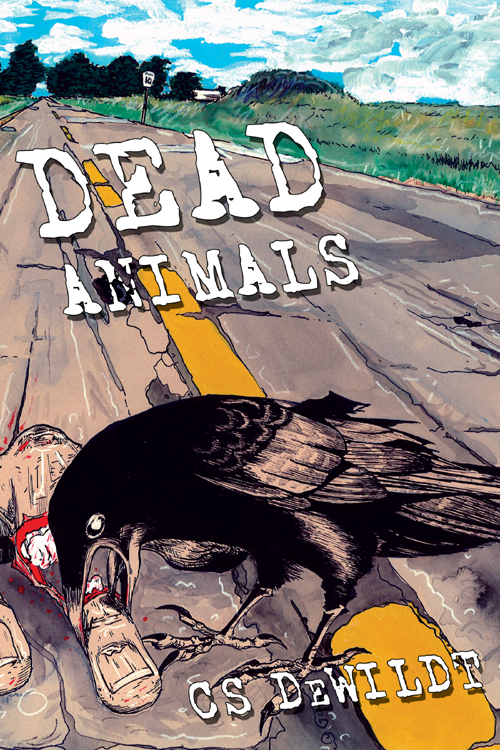 Dead Animals is short story collection by CS DeWildt. DeWildt's name has popped up in a lot of solid online publications such as Flash Fiction Offensive, Shotgun Honey, and Word Riot. Plus, he has a novella out called Candy and Cigarettes.

“Bull” is a solid start to the collection. It's a violent yet tender piece of neo-noir revolving around a young boxer and his overbearing father.
In “Shakespearean Variety” a teacher gives into his urges to fuck one of his students and DeWildt once again touches on the running them of animals in the book. His sexual urge is compared to a dog as well as the girl he's having sex with. I do wish there was more of an actual resolution.

“Love Among Apes” centers on a man who believes he has bugs inside his skin and tries his best to find someone who believes him. At chance encounter at the zoo, he brushes with potential love and more so a belief in his affliction, but it's short lived. A nice piece about the fleeting nature of love and apes and bugs.

“A Favor Returned” is one of my favorite stories. It's winter and the snow's coming down hard. A man accidentally drives into a ditch and gets stuck. He finds an old man to help him, but the cost is something much more than he can ever imagine. The ending sent chills up my spine.

“Human Zoo” takes the idea of closing off the borders to the extreme. In the near future huge walls are built and humans who have committed the most audacious crimes are sent to human zoos where they are put on display. The other interesting thing about the story is how exposed the narrator feels around his girlfriend.

“The Yard Sale” explores a recent separation between a husband and his wife. The narrator has a new girlfriend and the wife has a new boy toy as well. However, there's much more going on in-between the lines. Longing for new addictions, missing old ones.

“Tu Chicken” is a poignant story about a boy's father who reminisces on all of his murders building up to his haunting murder during Vietnam.

“The Tree House” was a little too over the top for me. Marcus suddenly starts murdering all of his friends because he becomes the blunt end of a joke.

“Dog Don't Know Jesus” is definitely a standout. It's about a young boy who goes off into the desert searching a coyote that killed his dog. The prose is tight and the imagery is vivid. I might have to go back and re-read this one.

“Even a Face Can Have a Canvas” is about what distinguishes us from the animals, but at the end of the story the artist shows us just how animalistic we can become.

“Pulp” is one of the more poetic micro flash fictions of the bunch. A lot of contrasting imagery. Double meanings and such. Meat, pulp, and flesh all seem to mesh seamlessly in this story of a teenager (possibly) who is scared and intrigued by a female classmate who takes on the traits of a man-eater/carnivore type of girl.

“Know Your Enemy” is only one paragraph long but the narrator gives you some advice on how to know if your enemy is really a fighter or bluffing. Nice, smooth prose here.

“She and Him” was a funny story. It starts off with a girl pursuing a man she had a crush on high school but the twist at the end really brings it home.

“The Night I Dug Up Raymond Carver” is the second to last story in the collection and definitely one of my favorites. It's a continuation of one of the earlier stories, but something completely new and weird. It's involves the zombie of Raymond Carver, a strip club, and the desert. The whole story is lovely.

DeWildt has delivered a dark collection of poignant rural noir with echoes of Hemingway and Carver. I truly hope DeWildt is working on a novel because I would love to read some more grittiness. (August 2013)

Purchase Dead Animals HERE.
Reviewer bio: Grant Wamack is a weird fiction writer, rapper, traditional artist and book slinger. He has had more than 30 short stories published in various publications and is the author of Notes from the Guts of a Hippo as well as the forthcoming novella A Lightbulb's Lament. He currently lives in Spain, but you can find him roving the world as a ghostly apparition. Check out his blog http://www.grantwamack.wordpress.com