Review of Daniel Shapiro's HOW THE POTATO CHIP WAS INVENTED 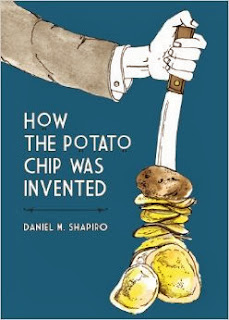 At any given time random thoughts converge in our minds like background noise—garbled dreams concocted from the day’s google search hits, binge viewing, game show and sitcom reruns, celebrity trivia—all this media pulp is strained through personality so that outer reality is merged with inner landscapes. Daniel M. Shapiro’s first full-length collection of prose poems, How the Potato Chip was Invented, features the mind as it is now, media-infused, yet old-school philosophic, humanistic and comic.

In part one of Shapiro’s three-part collection, he gleefully takes readers into the past, into the minds of pop-culture and historical icons: “Richard M. Nixon Attends Star Wars Premiere, Brea Mann Theatre, 5/25/77”, and “Thomas Edison’s Favorite Invention” are two examples that are timely for my generation— American children of the 1970s—unwitting recipients of mass media’s inculcation on our minds, 24/7. We couldn’t get away from it, unless we lived on a remote ranch with no television, or deep in a mountain valley with no reception.  We were the first generation to collectively imagine ourselves famous. In “Independent Film,” Shapiro plays the game of what actor would play me in a movie of my life:

himself as a lone guitar leaks out a soundtrack. I

. . . Finally, Hawke will look at himself in the

bathroom mirror, will survey the creases in his

skin, will see the real me as if I were hiding in

Shapiro illuminates how the mind works for many of us, children of the Harvest Gold and Avocado Green era. And as I read through section two’s persona poems featuring bawdy grinning Gene Rayburn, host of Match Game, and the pathos-laden humor of Charles Nelson Reilly, I eerily feel the poems are about me—as if Shapiro is playing me in a book of prose poems. “Language Acquisition” recalls early days on the couch with Mom, three or four hours at a time, as she “snickered at words, at how words can fit where they don’t belong . . . She propped me up on her lap to see and hear them say a phrase at a time, even one word, after which a bell would ring . . . the bells we associate with rewards . . .”

Part three reconnoiters among 70s, 80s, 90s, and early 2000s celebrities—famous and infamous—Metallica circa ’83, Lynette “Squeaky” Fromme, Natalie Wood, David Bowie, Julia Roberts, and Tom Hanks. Then Shapiro hooks us up with with Fred Astaire serenading Fergie, and Max von Sydow at IKEA. The most endearing celebrity encounter is “Don Knotts Returns to his Hometown of Morgantown, W.Va., 1982”. In the density of a masterfully written prose poem, Knotts’ professional career is concisely portrayed; then Shapiro compassionately engages us with Knott’s imaginary existential crisis as he rides a “personal rail system . . . alone until dawn.” Sometimes we, as consumers of celebrity, forget the soul behind the famous face.

Prose poems are high risk, many falter. Shapiro’s prose poems are vivid, intriguing, confounding, quirky, at times lyrical, and concentrated—all as it should be with no missteps. Shapiro takes readers deep into celebrity subtext that feels familiar, yet voyeuristic at times. We are rewarded with worthwhile insights into American life in a hyper-media age. (December 2013)

Purchase How the Potato Chip was Invented HERE.
Reviewer bio: Kim Loomis-Bennett is a life-long resident of Washington State, besides a detour into Oregon where she met her husband. Her poems and book reviews have appeared in The November 3rd Club, The Copperfield Review, Poet’s Quarterly, and Hippocampus Magazine. Her recent work is included in The Prose-Poem Project.  One of her poems is also featured on the Washington State Poet Laureate's blog at http://kathleenflenniken.com/blog/.  She teaches at Centralia College. She will graduate with her MFA, January 2014.