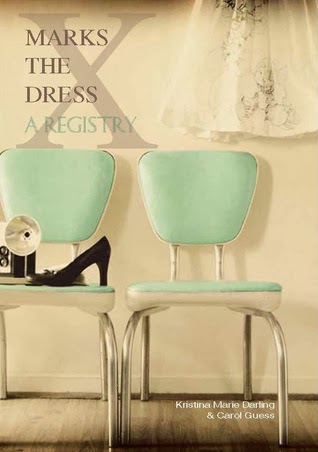 X Marks the Dress: A Registry

There are the things we want, the things we need—and the things we end up with. These items, exquisitely catalogued in Kristina Marie Darling and Carol Guess’s wedding day registry, X Marks the Dress, form a “parade of memorable objects.”

And leading the procession is the dress. Selected with antiquity in mind, history advises that the wedding dress embodies more than the betrothed’s suitability and attractiveness; wearing so fragile an outfit also invites ruin. Ruin in the bride’s inability to anticipate the “inevitable interpretation” of an outfit selected for wearing only once yet expected to represent for a lifetime, and ruin in the actual garment: its delicacy in color and fabric, its inclination to stain or tear.

In a cultural ceremony that signals “twin halves of the mortgage or the company car,” man and woman “mark each other” with mementos like the veil and ring. And if “nostalgia begins at home,” these wedding day adornments become sentimental touchstones in a life of car washes and lost jobs. The new wife will certainly run the risk of finding herself “prettiest in a wedding album, every ruffle on [her] dress neatly pressed, every strand of [her] hair in place,” but she is after all a bride for just one day; thereafter, she is “bridled.”

So husband and wife bedeck their shared home with the items once earnestly listed in a wedding registry and intended to carry them across the roughest of marital waters. If the bride’s “dress begins a sea,” the newlyweds bob amid the objects of their well-stocked life. And when the marriage begins to dissolve and wedding gifts go adrift, sentimental trinkets intended as ballasts prove instead to be “dead weight,” each souvenir carrying with it the loaded acknowledgment that “there are always mementos.”

It is within the space carved out by the Darling and Guess collaboration that these keepsakes—outwardly all pastel frosting and silky flounce—prove themselves capable of provocation. Through their innovative union, the poets embark on an assignment of not only the ways these objects mean, but the shifting language that ascribes their meaning. Objects may arrange themselves within intimacy but they refuse to settle there, instead re-imagining and re-documenting and re-distributing themselves as profound signifiers of coupledom, identity, and individuality.

And if even as she turns from the altar the bride’s dress has begun to unravel, working to “sever a lie from the life it’s leading” may seem a straightforward task. Yet for Darling and Guess, who appear to follow the thread that undoes itself with as much fervor as the reader, a splitting into simultaneous sequences occurs that makes a simple snip impossible. After all, “history begins with the future” and to sever is to suppress.

X Marks the Dress proves itself a marriage of equals, yet Kristina Marie Darling and Carol Guess’s wedded bliss bristles at what is reflected in the “silver mirrors [that] surround the secret.” Projecting from the speculative space between declarative registry entries and leading the parade along a deconstructed and disconcerting route, this poetic passage between persons and personas is certainly worthy of our observance. (August 2013)

Reviewer bio: Erin McKnight is the publisher of Queen’s Ferry Press. Her own writing has been nominated for the Pushcart Prize and W.W. Norton’s The Best Creative Nonfiction, and her reviews of fiction and poetry can be found in multiple venues. Erin lives in Dallas with her husband and young daughter.