Review of Daniel Beauregard’s BEFORE YOU WERE BORN 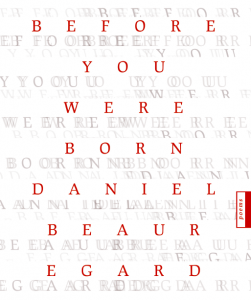 Before You Were Born

When I teach college Lit courses, I spend most of the poetry unit re-teaching my students how to read poetry.  Some ground rules: 1) don’t assume everything is a metaphor, 2) sometimes language and sound are just as important or more important than meaning, 3) read poems with a sense of humor, 4) a poem is often “about” more than one thing, 4) if you like a poem, you should read more poems.

Daniel Beauregard’s BEFORE YOU WERE BORN could be a handbook for this kind of reading.  The poems in the chapbook are often prose poems, often alliterative, sometimes koans, sometimes jokes, each lovely to read out loud.  The final lines of “Bathing in Gold,” are a study of language: “to fixate for a moment on the fuzzy/ limbs of a persimmon then sit back down/ ass-first, giving myself permission to orange.”  The repetition of sounds, the way “persimmon” mirrors “permission,” and the unexpected but somehow appropriate use of “orange” are par for the course in Beauregard’s poetry.
The poems have a playfulness and a sense of humor that gives some of the more serious ruminations a nice wink.  “Flirt Poem” takes us from a car that gets our speaker “from A to B, and C on weekends,” to “people read[ing] their own shit like tea leaves,” to the closing, “The doily of our love. Come to me, gluing crumbs/ together until we’ve got the whole Danish.”
And just like the unexpected use of “orange,” just like our movement from car to love as Danish, what strikes me most about Beauregard’s work is his ability to start with one image or thought and fan out into the surprising and the seemingly unrelated.  “Red Velvet Koan” connects the practice of Ubsante to lonely Kathy in the break room.  In “Maths,” he writes, “As a kid/ I made pictures of numbers committing suicide, then you.”  Sometimes the connection is easy to see, sometimes it’s a jump that stops you, but one that somehow makes sense.
Many of the poems are also written in the style of other writers, Nick Sturm and Bruce Covey, for example.  And while the poems still feel very much like Beauregard’s, they serve as their own connections to and celebrations of poetry right now, one that can send readers to seek out the inspiration of their favorite poems.
BEFORE YOU WERE BORN is the second release from the new press 421 Atlanta, and it’s promising of more great reads to come. (January, 2014)

Purchase Before You Were Born HERE.