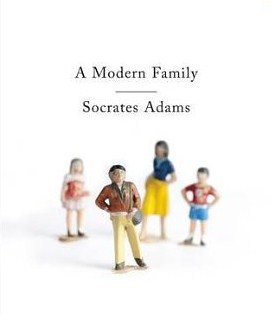 A Modern Family is about a television presenter on a popular car show in England (almost explicitly James May), his wife, Prudence, and their children Bobby (15) and Ellen (slightly older). They live in upper-class London (not extravagantly so). Being a family of four with one girl and one boy, they rang to me, at least in outward appearances, as the quintessential traditional family.

Conceptually, the story first struck me as a better idea for a short story than a novel. A book centered around a semi-popular celebrity was strange to read at the start. I wondered how in the hell Adams was going to sustain the concept, but then he does. It develops. It’s thematic. The characters are varied but conceptually linked, and there were several troubling emotional moments.

Stylistically, there is something powerful in the disorientation in the prose. Adams often writes like an alien chronicling human culture.

“One of the children screws up her face. She is the oldest one. The best way to tell the children apart is that one is a boy and one is a girl.” (pg. 4)

But it is through the straightforward, unbiased presentation of information that we view ‘modern life’ in a new way—for how strange it is.

Content-wise, Adams seems to be ruminating on detachment. Each of the family members has some sort of unfulfilled longing. For Ellen, it’s her secret longings for a lesbian relationship with her best friend. For Bobby, it’s an in-game romance on World of Warcraft. Prudence longs to live Kate and Prince William’s wedding, and the television presenter longs for longing. I’m simplifying things a little here but all the families’ wants are abstract or impossible. The closer they come to attaining the objects of their affections the more absurd their situations become. The family lists aimlessly. They tear themselves up both figuratively and literally in increasingly misguided attempts at happiness. It’s not an upbeat book.

“It’s not fair to anyone for her only feeling in life to be a pathetic, unfulfilled love. Ellen wants to burn everything down and sit in the ashes and do nothing.”(pg.124)

It’s easy then to extend Adams’ critique of the family to society as whole. We are always wanting, we could always be a little happier if we had something else, the more impossible the better. We are first and foremost consumers and then family members, students, employees, etc.

Instead of focusing on personal sadness and ambivalence as the subject of his work, Adams seems to be looking from the outside in—it’s far from catharsis for him. Adams is a first rate satirist. Modern Family is really funny, thought provoking, and often morally disgusting. All of his characters are tragic figures because they’re so powerless, and Adams writes them so well that instead of demanding blame, they all demand sympathy. (July 2013)

Reviewer bio: Wyatt Sparks lives in Chicago. His echap As We All Change is forthcoming in 2013 from Love Symbol Press.