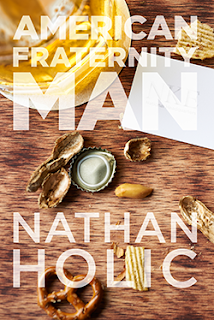 American Fraternity Man follows Charles Washington, brother of Nu Kappa Epsilon turned Educational Consultant after graduation, on the traditional hero’s journey. His quest: to “change the culture” of fraternities and sororities—a culture that for the last four years has provided him with a role, a set of relationships, and a taste for Grey Goose vodka. Driving across the central U.S. with a copy of the Consultant Code of Conduct in the passenger seat and his clothes for the trip hung in the back of his Ford Explorer (handy diagram provided), he descends into underworlds of rule-bending and rule-breaking, drunkenness and cheating on his girlfriend, as well as deeper dishonesties that challenge his perception of fraternity life as life, unqualified and unexamined.
“Save the World … The world of fraternities and sororities,” the recruitment email from the national office reads, establishing a conflation of the former with the latter that persists throughout the novel and is not always firmly located in Charles’s narrating consciousness. Like many heroes, Charles is seeking himself, and that often translates into self-seeking; Nathan Holic is particularly good at showing how easily this character is swayed. Charles flings himself on every fresh (more often stale) version of reality that other characters present to him, clinging to anything that will tell him who he is and what he can get out of being that person: the polo-shirted “Marathon Man” of the NKE pledge book, the eager acolyte, the “Fun Nazi” who shuts down parties, the good-time guy who can go drink for drink with the brothers who haven’t graduated yet.
Part of the problem for him, and for us as we read, is that all of these options are terrible. All of the men he can be are fraternity men; all of the dragons he can slay are fraternity dragons. This is not to say that the things that happen within frat-house walls, or at National Fraternity Headquarters, or even on fraternity Facebook pages are unreal; many scenes and conversations show how violent and grotesque “the culture” can be, and a few show its ability to ennoble and unify. But options outside “the culture” don’t cross his mind, which means, for the purposes of this book, that they don’t exist. Holic illuminates many of Charles’s vanities, ill-placed loyalties and plain old assholeries with his own more developed perceptions. But other events—most notably an NKE brother’s mention of a rape accusation—are weighted according to their negative effects not on non-frat individuals, not even on the fraternity or its members, but on outsiders’ perceptions of them. The story asks us to judge Charles, but with so many layers to peer through, it can be hard to tell what direction it wants our thumbs to point.
Holic has taken on a heavy threefold task: he wants to convey information, and not just flattering information, about the fraternity/sorority industry and culture; tell a story in which things happen and stakes are high; and trace his hero’s growth. Charles’s awfulness for most of the book, and the flatness of some other characters—particularly his girlfriend Jenn—often feels purposeful because the zone of that growth is his realization that other people are people, not just reflections of, conveniences for, or threats to himself. The scenes where that growth most emphatically takes place—with a brother from New Mexico State near the middle of the book, and with Jenn near the end—are spelled out a little blatantly but feel emotionally true. At the end, it’s less likely that his reaction to hearing of a pledge’s death would be resentment that it “feeds the frat guy stereotype.” But he still sees his decisions and their results primarily in terms of himself, his sense of self. To weigh that evenly against someone else’s autonomy, their safety, or their life, the scale has to be rigged, the proportions of the world distorted.
The best novelists have in heightened form the aspect of adulthood that our hero is groping, sometimes drunkenly, towards: they make us feel the realities of others as so real, so complicated and so possible that they measure up to our own. At the end of American Fraternity Man, Charles Washington is just beginning to understand this aspect of being a human being in ­­any world. This suggests that in his next book, Nathan Holic may achieve it. (June 2013)