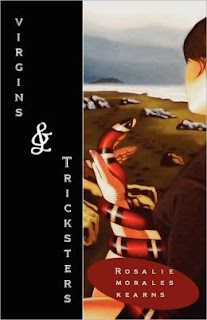 In “The Associated Virgins”—the first story in Rosalie Morales Kearns’ captivating collection—Elihu Wingate, “an expert on the psychology of consumer behavior”, experiences a morphing reality as both his personal and professional lives collapse.  This frantic fracturing of one man’s career, relationships, and mind is a slow burn, and the escalation is steady and sure of itself.  At a certain point, an assortment of porcelain Virgin statues amass themselves around him, and when, by the end, he feels their hands “patting him, soothing him” as he suns himself near the pool, we realize that his life has shifted from the mundane to an obliterated strangeness.  We understand how he got here, but we’re surprised to find ourselves there with him, too, half-believing that the statues are alive and enveloping the remains of his world.  It’s this balance between the actual and surreal that’s so tantalizing in Kearns’ work.

The characters that inhabit these pages include those that other writers might render as peripheral or ephemeral.  However, in Kearns’ stories, these characters—most of them woman—are made actual: their dilemmas are compelling, their choices often difficult, and the roles into which they’re pressed can’t quite contain them. “The Wives: A Story Cycle” is comprised of four separate tales—“The Revolutionary’s Wife”, “The Pirate’s Wife”, “The Priest’s Wife”, and “God’s Wife”— that complement each other in powerful ways.  While the titles might suggest women “types” often evoked in broad, familiar strokes, Kearns challenges any assumptions we might make: these wives are precisely, painfully human.

In “The Priest’s Wife”, a woman wrestles with her marriage to a man who assumes the priesthood in his deceased brother’s place.  As her simple ploughman husband rejects her, she’s left to consider what, if any, happiness might be left and where she’ll find it.  She confides to the Virgin Mother as she watches her husband “lumbering up to the altar” in the ornate and ill-fitting cassock.  She recalls who he used to be: “You’d never know how graceful he looked chopping wood or baling hay.” It’s in this simple, heartbroken memory that readers understand this “wife” is much more than the role she plays. She is grounded in a sad, complex reality that is particular, all her own.

While some stories in the collection are short, the most compelling pieces are those that take time to unspool, sprawl, and build.  In these tales, we come to know the protagonists, the tension in the choices they make, their desires.  Kearns has a gift for using a slow escalation to deepen the reader’s relationship to her narratives. The stories that percolate, gaining urgency and surprising us bit by bit, are satisfying because we often arrive somewhere unexpected yet earned.

The last piece in the collection, the novella-length “Triptych”, is one such story. An engrossing portrait of three strangers—Larry, a divorced father wrestling with choices he’s made and those that stand in front of him; Patrice, a middle-aged woman in a memoir class at the YMCA; and Julie Anne, a young woman with a complicated relationship to her mother—their lives converge in ways we don’t anticipate.  What might feel like a device in another writer’s hands makes for engaging, graceful storytelling: the shifts between perspectives are fluid, the momentum builds incrementally as our knowledge of the trio deepens, and the intersection of their lives both surprises and delights.

It’s been years since I’ve settled into a book like this. Rosalie Morales Kearns writes stories you pull a chair up to, you lean in close to hear, you get lost in as the afternoon passes and you forget you had other things to do.  Yet, it’s not that the stories are comfortable—these worlds of virgins, tricksters, wives, daughters—are fraught with complication and searching. Nor do they lack surprise: by blending precise realism with wild magic, Kearns subverts our expectations in subtle yet astounding ways. (September 2012)