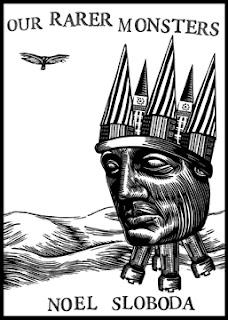 “Bequest Narrative,” the first poem in Noel Sloboda’s Our Rarer Monsters, feels like an invitation, a prose poem that reads more like an introduction.  We’re told of a man who wears a different hat every day constructed from the pages of his late librarian father’s extensive book collection.  Sloboda’s fable calls to mind fables themselves, how we collect them, how we distribute them, how we treat them.  It calls to mind the “point” of the stories we tell.  And it entices us to read more.

The poems are accompanied by linocut illustrations by Marc Snyder.  The linocuts are striking portraits inspired both by characters in the book and by the first poem, each wearing a different hat.   The portraits are at once iconic and made new by their respective hats and by the emotions carved into the faces.  They are portraits that make you imagine the rest of the story.

Our Rarer Monsters is full of the familiar characters inside renewed myths.   Sloboda places mythological heroes and villains into everyday life.  Grendel is having marriage problems in the suburbs.  Prospero was kicked out of the retirement home and must live in his Citron.  Baba Yaga is a recurring character, serving as a Pez dispenser icon, acting as a figure drawing model, annoyed when her house lays an egg.  She becomes a character we look forward to seeing.

Often, the book moves away from the fantastic and rests in the domestic.  The poems offer us the fabled characters in our own lives, the fraternity pledge in “Initiation” or the expelled student in “Discipline” that have become part of school lore, those tales with twists at the end.   And then there are the personal myths, what our anecdotes become, no matter how simple.  These poems often touch down in childhood, showing us the aftermath of a teen neighborhood prank or a child’s belief of what a plastic snake in his pocket whispered to him.  Most striking are those that focus not on the story but on the moment, like “As Above,” where the speaker dreams of the seedlings that have taken root in the gutter, of waking “to find/tendrils snaking through//AC vents,” to be reminded “of just how//far from the sun I dwell.”

While the imagination in the poems is often intriguing, many of the poems settle into preciousness.  The poems seek to be clever, are written toward a punch line.  The Jolly Green Giant used to be a red meat eater.  A clip-on-tie salesman shouts out failed sales pitches.  A speaker gives a list of instructions to his stunt double.  I found myself wanting more from these poems.  While the premises are certainly interesting, I wanted them to go beyond the premise, to go beyond the punch line.  I wanted these poems to exhaust the idea, not necessarily to offer all the answers, but to complicate things.

That being said, the poems are written with tight lines and an attention to form that feels appropriate for the fable.  And the playfulness in the poems, the way they keep calling into question the myths we tell ourselves, may well be enough to keep readers satisfied.  (May 2013)