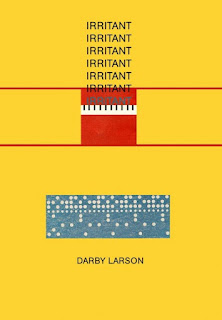 Writing a ‘very long book’ is the literary version of hitting the ‘Max Bet’ button on a slot machine. Where a smaller work may receive a little praise or a little criticism, a larger work of the same caliber will elicit responses amplified simply by the effort the reader had to put into its consumption. Larger works also seem to drum up a certain amount of pre-reading excitement and the attendant derision by those who will inevitably deem the work pretentious, scholarly, or inaccessible simply due to the book’s greater girth. Big books also tend to be difficult to encapsulate well without resorting to pretty idiosyncratic and abstract metaphors. Having placed these invisible elephants in the room squarely on the table, or whatever, one should simply note that Irritant fulfills most of these usual ‘large book’ expectations so you’ll just have to bear with me, take a grain of salt and ideally just read the thing yourself and form your own opinions.
The most accurate way I have found to convey the contents of Irritant is that Darby Larson has taken twenty to thirty broad ‘memes’ (this term used here not in the sense of a ‘dumb internet joke’ but as the more rigorous and primordial ‘building block of thought’) such as ‘man’ or ‘balloon or ‘irritant’ (each word with its attendant connections, archetypes, and various other mental baggage). Larson then gathered together a number of sentence structures such as ‘So in something of X lived the Y while the Z Z’d in front of the A’. Larson then places the memes into the sentence structures in varying combinations (I didn’t keep track but it seems like Larson at least approached exhausting all of the possible permutations). Of the many, many sentences Larson constructs a few of them have an illusion of meaning, others come off as dreamy or surreal, and many are gibberish. Larson takes a handful of sentences that he keeps static and repeats these at various intervals to provide a sort of slow rhythm to the work. Other sentences pop up once and are never seen again. One gets the feeling of cycles within cycles, variously scaled orbits of repetition which alter and repeat within themselves. The memes themselves rotate in and out of use very slowly. This combination of repetition and glacial, understated change felt reminiscent of the general structure in Steve Reich’s pieces.

It may not be surprising that all classical elements of character, plot or thematic cohesion are absent except for those which may be superimposed by the reader. This is surely an intentional move on Larson’s part. The primary enjoyment of Irritant then lays in watching the unusual ways Larson cuts up the English language and the impossible connections that form between words. I found Larson’s word play here to be lacking in innovation and too steeped in repetition to be innately interesting. Irritant follows a clever concept but for sheer enjoyment I felt it falls under its own weight and delivers only in rare bits, leaving most of the work a jumbled bog of language. I can, however, easily imagine that those who are excited by works which revel exclusively in playing with language—hardcore word nerds and fans of Cake Train, Blake Butler or Gertrude Stein—will no doubt find Irritant an inexhaustible and invigorating work.

The experience of reading Irritant (and I think in many ways the work could function better as a verb than a noun, as in ‘I think tomorrow I’m just gonna Irritant’) felt to me like climbing a mountain: the giddy, nervous approach, the initial rush of discovery, the resignation to a long and difficult journey, one foot ahead of the other, the discovery that the peak is beautiful but more or less identical to all other points of the trail, then a look back from the ground at the journey in awe and exhaustion. As in mountain climbing, no one is going to give you a medal for finishing Irritant, most people will not care that you did, and a few who know may be confused as to why you did it. All you will have left after finishing is the sense of satisfaction at the knowledge that you have explored a place of mind that very few others will ever reach. There will no doubt be groups of Irritant megafans who will be able to endlessly discuss the experience.

With the work itself over six hundred pages (a previous iteration pushed 900) I think most readers will get the gist of the novel, and have their fill, before reaching the very end. Regardless, in and of itself, Irritant should function as a satisfying conceptual Objet d’art. (June 2013)