Review of Andy Couturier's A DIFFERENT KIND OF LUXURY 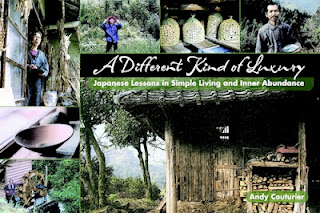 A beautiful book, considered as an object, and an idea that resonates strongly with me: Less can indeed be more. Life’s clutter isn’t inevitable, and it isn’t always desirable. The simple life needn’t be spartan or uncomfortable; the means of making a living needn’t be soul-killingly boring. Choosing a balance of life, living, and lifestyle can be liberating without being impoverishing. It is telling that the land that gave the world Shinto, the natural world’s religion, gives us the exemplars of balanced creativity and productivity shown in this lovely object.

The author lived in Japan for four years. He appears to have that rare quality of being able to become friends with the most interesting person in every room he enters. The eleven people he has selected for this collection of profiles are each worthy of a book of their own. Meeting any one of them would be a highlight in a four-year period, let alone all eleven of them.

Couturier lives in Northern California, which is unsurprising. His affinity for the simple-life-of-purpose would logically lead him to the home of the American Counterculture. His Japanese friends are all urban escapees as well, though several have lived in major urban centers in their lives. Masanori Oe, for example, was an experimental filmmaker in the New York counterculture of the 1960s. He felt he had to leave Japan after World War II:

“That was the psychological scenery then: everything had fallen apart. Even the folk festivals disappeared. There was no money for that kind of thing, and no interest.

At the same time, the experience I had at the end of the war led me to have no confidence that my mother and father could protect me. There was nothing I could rely upon, nothing I could trust. Later, when...a lot of American culture came in [to Japan]...all of this was locked up inside of me, I began to resist everything, I couldn’t believe in these things that had crumbled before my eyes.”

After New York and its wild ways, Masanori moved to Tokyo for the 1970s and created more art, including a translation of The Tibetan Book of the Dead into Japanese. Coming to a Buddhist understanding of illusion, Masanori stepped out of the culture of possession and creation of possessions, moving to Japan’s Alps in a statement of intent to simplify his life and his world. His hectic life of bringing alternative awareness to the urban Japanese culture gave way to a pastoral life of harmony with the seasons, marking passing time with harvests and childrearing milestones, and moving slowly to write and publish his own philosophical view of the world.

His story is archetypically Countercultural, whether for Japan or the US. The outlines of the tale are out of Thoreau, leaving the hurlyburly of the nineteenth century behind as he travels to Walden. This is a seductive, beguiling dream, this laying down of the world’s imposed cultural burdens to take up those of a harder, older tradition, and finding in that trade for a harder way of making a living a tremendous ease of life.

The ten other people profiled made very similar choices, and followed reasonably similar courses. This is the weakness, if it can be called that, of the book. It is repetitive if read as a single experience, as most books are meant to be read. Far better, in my view, to dabble, to shop among the profiles for the one that best suits one’s mood of the moment. Each iteration of storytelling has some unique moment, some wonderful phrase or essential insight, that could easily get lost if the book is gobbled. Approach the experience of reading as you would a bento box meal. The rewards will be commensurate with your patient, inviting effort. (February 2010)