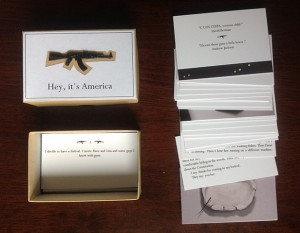 “I decide to have a festival. I invite Dave and Lisa and some guys I know with guns.” So begins Ridge’s sharply humorous story that touches on gun culture, exploitation, and masturbation guilt, among other things. A nameless first person narrator, who is terminally confused with a man named Brad “who throws really great festivals,” creates a festival of his own with the help of some friends. His friend Dave works at an orphanage so he’s able to contribute to the festival’s head count in the form of ecstatic, dancing children. Brad, the festival guru himself, instructs the narrator to focus on exploitation to help further the festival’s success. Brad encourages him to “Sell things. Sell lots of things.” Our narrator’s friend Lisa answers the call by slinging tickets to other festivals during the festival. And of course let’s not forget the gun-toting, Constitution-quoting guys who are adamant about keeping tyranny from rearing its ugly head at the festival; they’re perched in the nearby woods, popping off rounds. But, as with any festival, things really don’t get cooking until the police show up in search of a permit. What Ridge has created here in this short work—it can be ingested in one sitting— is a wonderful concoction of silliness and wit and danger that comes in the form of roughly fifty or so small cards the size of business cards. They come neatly stacked in a box that boasts a tiny toy gun on its top, too. The presentation of Ridge’s work—the result of a collaborative effort between Ridge, Rust Belt Bindery, and artist Genevieve Lawrence who contributes a few spare and meditative images throughout the deck—further adds to the reader’s enjoyment of it. Overall, it’s a genuine treat, a curious and delightful creation that, despite its brevity, has enough current running through it to jump-start a stalled pony. Readers looking for something fresh and fun will surely find it here, though given the work’s limited run they’d better find it fast. (2012)