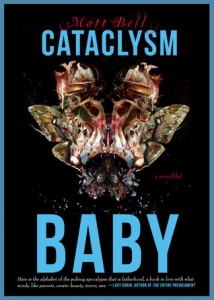 Failure is a major theme running though Bell’s dystopian landscape comprised of twenty-six connected pieces, though Cataclysm Baby—bearing some resemblance to a catalog of baby names—is nothing short of a creative success. In a collapsing, sputtering world, the adults are despicable and greedy, and their children—those who survive birth—are often feral or deformed, physically and sometimes supernaturally. In Abelard, Abraham, Absalom a son is born covered in hair, “inverse of our own nakedness,” and in Yaretzi, Yasmina, Yatima a child is a “puff of womb-air” that seeps into the world as a disembodied, menacing “daughter-voice” that commands its broken, guilt-plagued father to build a tower into the sky. The children may be aberrations who are sometimes ritualistically sacrificed with the belief that the others might live on, but it’s the men—desperate for the continuance of their flawed bloodlines in a dying world—who are the true monsters in this work. The women in these pieces are often viewed as “receptacles” that need to be filled, if not willingly then by rape. Over and over they’re subjected to violations that usually lead to failed pregnancies. The world Bell has created is bleak and violent. Its overriding success is its ability to keep the reader rapt, not unlike a passerby on a highway drawn to an endless string of roadside carnage. Bell’s writing is surgical and smart, making great use of measured repetition to create an alluring cadence for its array of narrators. What’s curious then is Bell’s decision to maintain a first person narration throughout, given that the voice is largely unchanging despite being spoken by twenty-six different fathers. It’s a decision that allows the pieces as standalones to work exceptionally well, though when sewn together, some of the resonance of that early, unique cadence is lost as this cadence quickly becomes the standard. As an allegory that focuses on the fear of parenthood and how it can be painful and destructive but also necessary for the growth of an individual as well as that of a society, Cataclysm Baby is powerful, original, and wholly mesmerizing. (April, 2012)