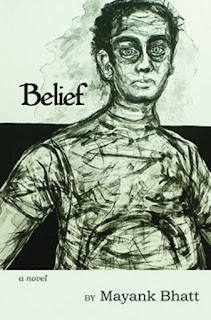 Newly unemployed, and seeking to develop his computer skills, Abdul Latif opens his son’s laptop and discovers evidence of a terrorist plot. He immediately turns his son, Rafiq, into the police. Heartbroken, he and his wife watch as his son is arrested and “frog-marched” out of their townhouse. They arrange for a lawyer, attend the hearing, and remember. As they travel the labyrinths of their past, Rafiq struggles to cope with the harassment of other inmates, his interrogations by two agents from the Canadian Security Intelligence Service, and the truth.
Bhatt’s probing into the deeper reasons why some young Muslims can become disaffected is worthy of respect. He never takes the easy out but explores issues that are often left unexamined, such as the chronic underemployment of immigrants and their identification with their coreligionists ‘back home.’ Thus, Abdul and Ruksana work long hours at minimum wage jobs, raising their family in a one-bedroom apartment until, at last, their children can buy them a townhouse. Huddled together in front of a Hindi channel, the family is rocked by violent riots back in Mumbai. Abdul’s depression at losing his job is offset by the breeze in their small backyard, but that small patch of earth is small comfort for a son agitated by what he perceives as worldwide injustice. At the time of his arrest, Rafiq is twenty-two years old and incapable of empathizing with his parents’ sedate appreciation of their kitchen and its appliances.
Belief is populated by Muslims of disparate countries of origin, ages, and political persuasions. Without exception, they are hard-working. Some are middle class, others are trapped in “half-lives” that Rafiq considers “pointless” and “mechanical.” Abdul and Ruksana were union activists in Mumbai and held fast to their liberal political and religious views after immigrating to Canada. Zamin, Rafiq’s sister, has inherited their secular liberalism. Her husband, Jameel, speaks with a Trinidadian accent, drinks rum, abhors terrorism but still helps the family he married into. Nagma Khala, Rafiq’s childhood babysitter, is the only conservative in the bunch, and she stubbornly refuses to comprehend why the police are going after “these nice boys.”
Homegrown terrorism is a volatile topic. When you close this book you are left with a twenty-two year old in a hoodie sitting across from two CSIS agents, wondering what it’s all about. In a sense, Belief is about a lonely, alienated kid who flees the claustrophobic evenings of his parents’ home to play on his nanny’s computer. The chatter, in various Hindi-English mixes and Hindi dialects, conjures a world vivid and real. It lacks only the aroma of slow simmering food. Zamin and Jahmeel pull out their cell phones regardless of whether they are in the middle of a family drama or in front of an old Hindi movie. Belief works in that it convincingly creates these particular people living through this particular trial. It is an unbelievably engrossing read. (September 2016)