Review of Anthony Michael Morena’s THE VOYAGER RECORD: A TRANSMISSION 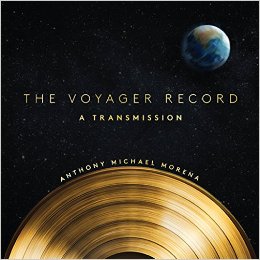 You’ve probably heard of the Voyager Record, the golden record (or really records) sent into space in 1977 with messages from Earth to intelligent life that might happen upon it.  You might have questioned the choice of sounds and images chosen by Carl Sagan and his team to represent Earth.  You most likely haven’t spent as much time thinking about or listening to the record as Anthony Michael Morena.  Morena has taken his self-proclaimed obsession with the Voyager Record and created a lyric essay that manages to be a critique and tribute at the same time.

In the book, Morena references his own love of mixtapes and playlists, and what is the Voyager Record but a mixtape?  What is a lyric essay but a different kind of mixtape?  Morena artfully shuffles between the factual, the analytical, the imaginary, and the personal. The book is peppered with snippets from the record, ruminations on the politics behind them, imagined and tragic scenarios of aliens who come upon the record, playlists that could have been, Morena’s own life as an alien in Israel, and fictionalized vignettes of Sagan’s personal life, all orbiting each other and returning.

The book often focuses on what’s missing from the record: where ethnocentricity, privilege, and 1970s morals got in the way of an accurate portrayal of Earth and its people.  Morena’s prose reflects this absence by giving us space.  We are often left with one subject per page, and one paragraph, one sentence, sometimes one word per page.  This steers us toward judgment by simply making a statement and letting us ponder it as we flip.  And many pages later, we find the conclusions we’d come to or the questions we’d asked.
Matched with Rose Metal Press’ beautiful bookmaking, Morena has created a compelling read that is at once humorous and poignant, that empathizes with the creators of the Voyager Record and looks back at them with 20/20 vision. (May 2016)