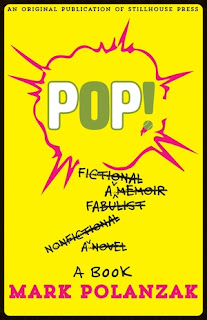 On the surface, Pop! is a book about grieving. One day in 1998, while playing tennis, Mark Polanzak’s father dies. We learn quickly, though, that there’s more to it than that. We’ve only made it to the second line when we learn that “Mark Polanzak’s father exploded.” So begins Polanzak’s attempt to make sense of the loss of his father. Through a mixture of short stories, essays, and other recollections, we learn what it means to lose, and what it means to work hard to understand that loss, even when we’re not sure that we can truly understand what is in front of us.

Pop! is an interesting hybrid work, in that it weaves the aforementioned styles of prose together to form one coherent piece that keeps you turning pages, trying hard to understand—if you’ve never lost a parent—what it is like. You’re just as likely to encounter a short story recalling the day Polanzak’s father died as you are an essay following the author as he attempts to speak to another boy who has also lost his father.

The short story sections in Pop! might be polarizing too. They read at times like Introduction to Fiction stories, filled with the devices and moves of an artist seeking to find his or her footing. When seen repeatedly, these could become a bore—or, worse, an annoyance—until you realize this is, in a way, how people grieve. We obsess over the same scenes, the same images, reimagining the minutiae because that is all we have left. Polzanak, later in the book, sums it up while talking about his own experience playing tennis with his father: “I just wanted to win without trying, without putting in the time. Like everything else. Like writing. I just wanted to be gifted. At tennis. At art. At grieving. But it all takes practice.”

What is perhaps the more interesting aspect of Pop! is the self-awareness that pervades almost every page. Polanzak is grieving, but he doesn’t know if he’s doing it right, so he does whatever he can, and he acknowledges this: “I never methodically follow the grief process, and so thought I wasn’t doing it correctly. Now, these scientists were telling me that I was doing it correctly no matter how I did it.” In other instances, Polanzak reflects on the stories he wrote, and the affectivity of them on his process.

Fitting nicely on a shelf next to the likes of Dave Eggers’s A Heartbreaking Work of Staggering Genius and Rob Sheffield’s Love is a Mixtape, Pop! offers an insightful, vulnerable look at the grieving process. Whether you’ve lost a loved one or not, Polanzak gives readers not only a powerful narrative, but an example of just how important hybridity can be to our conception of what a story really is. (March 2016)

Reviewer bio: Sam Slaughter is the author of the chapbook When You Cross That Line and the story collection God in Neon. He's the spirits writer for The Manual and currently lives in South Carolina. He can be found online at www.samslaughterthewriter.com and @slaughterwrites.