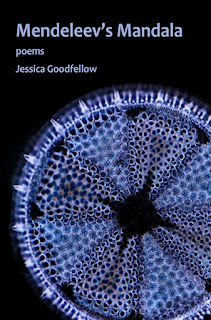 Jessica Goodfellow’s second book, Mendeleev’s Mandala, is an impressively full collection of work, connected in theme and tone but widely ranging in form. The book is well-paced and well-divided, and the poems stand strong as individual works while functioning as a cohesive and complete journey. “Journey” is an appropriate term because Mendeleev’s Mandala begins and ends in transit, and the pieces in between are of people lacking homes, physical or emotional. From the opening poem, “The Problem with Pilgrims”:

The problem with pilgrims is they can go home, but you already are.

The problem with pilgrims is now you are one.


Goodfellow is so sure of phrase that it was difficult not to just list lines from the book in place of
a review. In “The Blind Man’s Wife Makes a List of Words She Must No Longer Use”, she writes:

The guillotine is in the details.

There are countless lines in Goodfellow’s poems that can serve as keys to reading the rest of the work. The line above is meaningful not only to its own poem but also to the rest of the collection. Goodfellow uses mathematics, science, and history as frames to try to explain the inexplicable, common yet enormous personal tragedies of life. Her subjects are brought down by the details they cannot escape. In “Wilbur Wright Consults a Fortune Teller”, she makes masterful use of phrases attributed to Wright himself (italics hers), “afflicted with the belief that flight is possible” and “no bird soars in a calm.” Goodfellow’s poems soar because they are not the poems of a clear, still day. They are the poems of internal storms. Some familiar elements from Goodfellow’s The Insomniac’s Weather Report return here: clocks and time, nature, mathematics. She adds to these explorations of loss and emptiness, aging, fertility, and family. Perhaps the heart of the collection, the best lens through which to view the rest, is the third section, a series of prose poems concerning “The Girl Whose Favorite Color is Eigengrau”, a powerful sequence that makes the best use of Goodfellow’s themes and techniques.

She is a lungfish, able to exist anywhere and thus at home nowhere, except in the dark which is lit by her consciousness although she cannot see that, and also cannot help but see it, and thus is not the dark.

Mendeleev’s Mandala is bookended by “Pilgrim” poems. It moves from pilgrim to pilgrimage, from concept to practice, as a sequence of numbers take over the closing piece, “A Pilgrim’s Guide to Chaos in the Heartland”:

How to Distinguish a Child from 6an Adult:
For a child, count06ing backwards is as easy as counting for76ward9s.
An adult says5, Anythi3ng could happen, but is surpr7ised when it does.