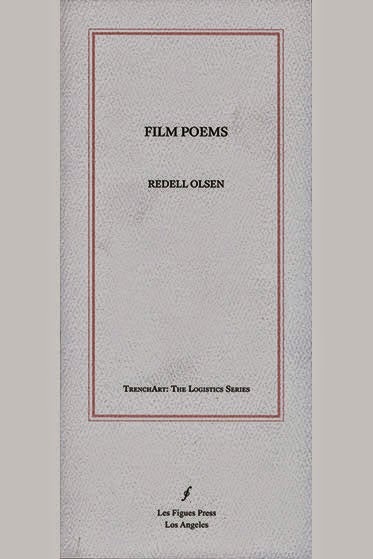 Put crudely, Olsen’s films don’t do narrative realism, actors doing dialogue, all that kind of thing. Her essay on the poetics of the swoon in the film poetics of Abigail Child suggests some perspectives on her own aesthetics. Along with Abigail Child, a fondness for Matthew Barney’s Cremaster Cycle is evident in Olsen’s recent book Punk Faun. In search of other precedents, not least to articulate the fragility of film’s performance, one might cite Robert Smithson’s slide lecture, Hotel Palenque (1972) or Victor Burgin’s Between (1986). In Olsen’s work, however, the conceptual weave is distinctive in its emphasis on poetry. Her films rarely use the soundtracks of found film materials, preferring to create a soundscape that can exist independently, whether as printed text or in performance, and so as film poems. (Drew Milne, Selvage, rafts, and peaches: Redell Olsen’s Film Poems”)

Film Poems (Les Figues, 2014) collects British poet Redell Olsen’s “texts for film and performances from 2007-2012.” As Drew Milne opens his extensive introduction: “This book brings together five poetic sequences, proposing film poems as the compound title—genre even—for these different texts.” The works that make up this collection—“London Land Marks,” “A New Booke of Copies,” “Bucolic Picnic,” “The Lost Pool” and “S P R I G S & spots”—are curious in part simply because of the form in which she composes: not for the page or the stage but for the screen itself. Given the range and breadth of poetic composition, from performance poetry to visual and concrete poetry, it would seem curious that there aren’t more poets composing specifically for film or video (especially given the variety of videopoem festivals around the globe). Utilizing variations on the essay, lyric repetition, sound, description, prose and the prose-poem, and a variety of rhythms breathy and breath-less, the range and possibility of Olsen’s ouvre is immense, and quite impressive. As she writes in “Bucolic Picnic / or, Toile de Jouy, Camouflage”: “first as a painting / off cuts of brazen // dazzle of fabrics / forbidden threats // of elsewhere // sets sells sails [.]” Given the works were originally composed for the screen, how does one read them solely on the page?

say I and you London land marks

say I and you in London mark land

say London land is marked by you and I

say I and you make marks in London’s land

say I and you mark lands in London

say I and you marked by land

Film Poems is a good example of and reminder that the possibilities of freshness in experimental poetry are far more open than most practicing writers often credit, and even manage to reduce much experimental work into a series of works that are all pushing in similar ways, and in similar directions. Composed for performance and the screen, Olsen’s Film Poems breathe fresh energy into collaborations between and amid forms, and of a form so often laden-down with purpose, seriousness and sameness. (May 2014)