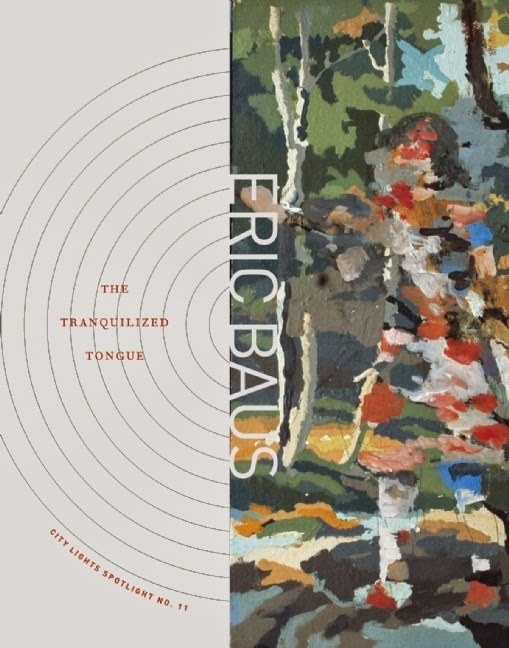 The tidal nerves were moon-burnt at birth. The grass the doves grew inverted the canopy. The stunned deer fished for glass oxen. The ur-creature’s escape elongated the animals. The statue stirred its ghost in a jar.

Following The To Sound (Wave Books, 2004), Turned Droves (Octopus Books, 2009) and Scared Text (Center for Literary Publishing, 2011), Denver, Colorado poet Eric Baus’ fourth poetry collection, The Tranquilized Tongue is a book-length suite of short poems that owes much to a French tradition. This is a tradition that includes, as the back cover tells us, Francis Ponge, Pierre Reverdy and René Char, a tradition characterized by explorations of ideas, a sense of the concrete versus the abstract, and the sentence. Extending his ongoing book-length exploration of the prose poem, there aren’t many poets who work the abstract book-length fragment in the way that Baus does, or so well, managing an anchor of concrete sentences that somehow accumulate into something larger and far more nebulous. The work of American poet Kate Greenstreet comes to mind, as does the work of Joshua Marie Wilkinson, or Sylvia Legris: three poets who also manage to stretch out the particulars of a concrete idea and situation through an accumulated abstraction. Through short, dense poems, Baus manages to utilize each sentence as a single point, accumulating those points into a far larger shape, one as much created by Baus as by each reader’s experience.

The embers cloaked the sleeping storm. The photograph of a bomb placed inside a rattled out lightbulb replaced the wind. The bird-child’s bed was hidden in the chimney. The invisible sisters collapsed. The mirror forgot what an hourglass was. The pharmacy filled with sand.

In a recent interview over at the Touch the Donkey blog, Baus discusses some of the construction of the current book: “My newest book, The Tranquilized Tongue, does contain a handful of true fragments in that they are not fully developed sentences. Some of that has to do with constraints that I used to write that book (I tried to write one poem every day, I generally limited myself to the vocabulary of poems that I’ve already written, and I often used cut-ups as a way to enliven the raw materials.) Sometimes during the course of writing my poem for the day, the raw materials I was drawing upon felt nearly exhausted, so I shifted the scale of the poem to become very, very small to avoid repeating myself or to change the pace of the book to give the reader space to rest before being launched into another dense paragraph.” (April 2014)