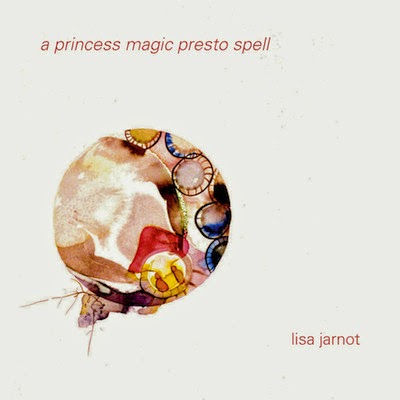 From New York poet Lisa Jarnot comes the exquisitely-designed hardcover book/chapbook a princess magic presto spell (2014), sprinkled throughout with stunning artwork by Emilie Clark. Constructed as a sequence of three poem-parts—“Amedellin Cooperative Nosegay,” “A Boa Constrictor” and “Every Body’s Bacon”—Jarnot’s small collection is a sequence of expansive collage-works, thick with names, references, mysteries, sound and images that collect, collide and mash into an intricate and complicated rush of densely-packed lyric. As she writes: “this state sponsored car alarm, my lost mason jar, vivian rose champion’s delicate victorian ankles, the / lonely bird, autumnal burnings, duncan’s, cold and clear, // while slyly coffee hangs / outside below a / wall of snow[.]” Composed in three sections, one suspects this might be but the opening sections of a far larger work, or could simply be what it seems: a three-part self-contained piece that includes almost everything.

Jarnot’s a princess magic presto spell blends collage and the list to create a poem aware of large moments, from “trapped chilean miners in a / spectacularly disappointing universe,” or keeping to small, writing on “bodega dust,” and:

leap over a
large rock splendored
with april moss

Jarnot has utilized the collage/accumulation in her work before, such as in the “Sea Lyrics” section of her Ring of Fire (Zoland Books, 2001/Salt Publishing, 2003), and her dozen or so books and chapbooks are rich with a variety of formal experimentation and play, including utilizing the sonnet, the lyric sentence and the prose poem, among others. Structurally, the flow of a princess magic presto spell goes back and forth between the deluge and the extremely small, winding and weaving akin to the utanikki, a Japanese-hybrid form utilized in the past by Canadian poets bpNichol and Fred Wah, blending haiku-like smallness with a more expansive lyric. Even the title could suggest an idea of translation and Japanese form, as a princess magic presto spell suggests what a Japanese title might translate literally (and poorly) into English, with the result being more confusion than explanation. The accumulation of the poem also leads one to suspect that the piece is complete only in as much as it holds everything she has placed within it, and could hold far more, if she wished. This is very much a book of play and movement, “this debauched kinesthesia / that big dream porn book,” exploring a language space where everything meets and somehow connects to everything else. (June 2014)