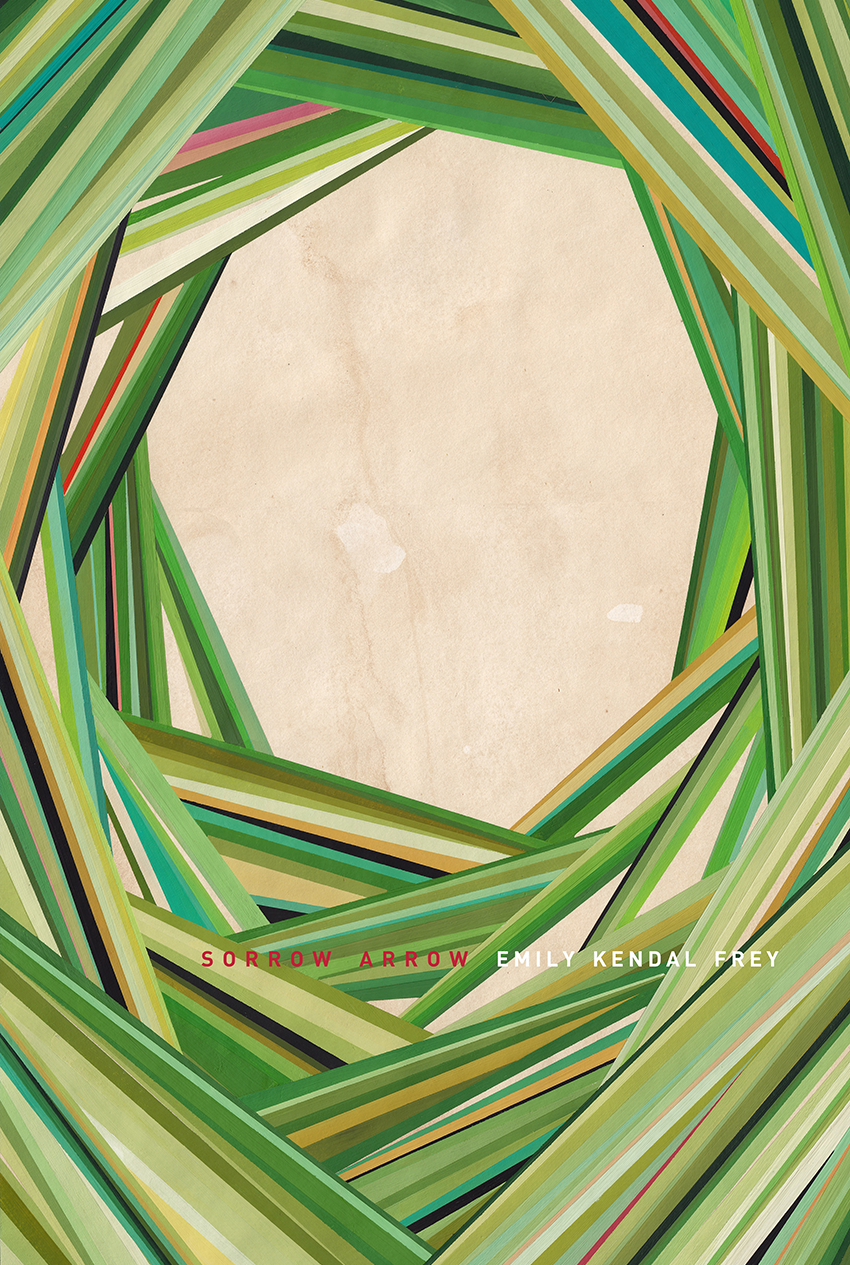 Your self-hatred has lost its precision
A metal gleam pokes through
In my reverie we’re eating boiled peanuts on barstools
It’s not sexy to be at home with your things
While bulbous paper lanterns hang overhead
Girls, stop peeing on the seat
Close range snowflakes
In my mind I’m running hard into your forehead

I’d been looking forward to Portland, Oregon poet Emily Kendal Frey’s second trade poetry collection, Sorrow Arrow (Octopus Books, 2014) for some time now, after the striking opening salvo of her first collection, The Grief Performance (Cleveland State University Poetry Center, 2011). Sorrow Arrow is constructed as a collection of short, untitled lyric fragments that accumulate into something far larger. It is curious that her first collection explores grief and this new collection explores sorrow, which suggests, at least, a positive direction. Sorrow Arrow opens with a quote from René Char, “Sorrow is the last fruit of youth.” Is Frey suggesting that this is something that carries life-long, or is this collection one that might also contain her last feelings of youth, composed as a final portrait of her youthfulness? Some say youth contains a degree of naïveté, and to lose this might be seen of a sign of growing older (or growing up), as she writes to open the second poem: “The Greeks sank / Their bodies gold / My body is Greek / What can I say to you / Your dick inside someone [.]” Given the hints that she runs throughout the collection, this entire work might be poised as a break-up collection, and the resulting sorrow wrapped up in a feeling of crossing a line from one stage of life into the next stage. This might be a break-up book, or some other possible romantic entanglement, such as a triangle or affair—in the end, the specifics don’t really matter. What does matter, instead, is the articulation of sorrow Frey’s narrator works through, nearly as short poem-essays meditating on the endless, hollow movements of grief. “You do not love me / I knew it when I entered the duomo capped in mint green / at the center of town / Jesus hung like a piece of toilet paper / Night opening its black flower / Every statue had bullet-sized holes in its feet [.]” Frey’s poems are constructed in relatively straight lines that crash headlong against and into each other, writing out her frustrations, romantic and domestic confusions, responses to her family, and her father’s illness, her rage and observations, and various other personal considerations. Early in the collection, she writes:

Don’t fuck with me, Christian PTA moms
My sandwich is overly mayonnaised
The cheapest thing to do in winter is get a disease
No one can figure out where the sky comes from
Trees lifting into the mist
The horrible light of morning
Shuffle in and out of sleep
Thighs aching like a giant
Moms twisting their fingers on Caesar salad napkins
Moms with empathetic bangs
Pin a badge on the dirty river
With my god hand I put us inside my father’s new heart

She writes of fear, grief and sorrow in a straightforward and fearless way, and explores dark emotions head-on. “Your skin suddenly moist / You put a baby inside her / Everyone’s tethered / To the supermoon [.]” There is something about the way Frey writes that is powerful, skimming the surface of pessimism but never quite falling into the depths, striking out with a precision that is cut-throat and calm, flailing wild and pinpoint, letting line upon line pile up against each other like firewood. Her poems read as notebook entries or collage-works, and what makes her poems so powerful is in the way she manages to pack so much into short phrase-lines, each one as forceful as a physical blow.