Review of Cecily Nicholson’s FROM THE POPLARS 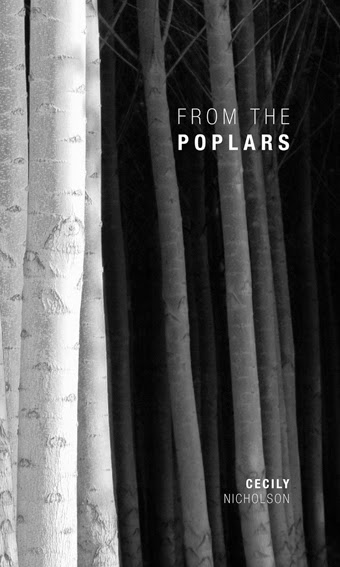 I have circled the same spot over and over

In the form of the book-length long poem, Vancouver poet Cecily Nicholson documents a geographic space in her second trade poetry collection, From the Poplars (Vancouver BC: Talonbooks, 2014). Nicholson writes Poplar Island, a small unpopulated island in the Fraser River in New Westminster, a suburb of Vancouver. The former home of the Qayqayt, a people devastated by smallpox in the late 19th century, Poplar Island eventually fell under the ownership of the British Columbia government, and much of the island subsequently became a massive shipyard. Unoccupied for some time now, the revived (and displaced/homeless) Qayqayt First Nation has been working to regain control of the island as their traditional space. As she writes: “history that no one / holds of interiors only imagined [.]”

pages damaged restored discoloured stained or detached wholly or partially obscured by errata slips and tissue, etc., are refilmed for the best possible quality of the image. the following diagrams illustrate the method

There has been a great deal of literary and critical work over the past few years dealing with native land claims and unceded territory all over Vancouver and throughout British Columbia, most recently around the 2010 G20 meetings and subsequent protests. For her part, Nicholson writes through and around Poplar Island, working from historical research, observation and an eye towards social justice, exploring what Dorothy Livesay famously called the “documentary poem,” providing a kind of poetic, historical and critical portrait of the island, its people and those who have impacted upon either or both. Her poem, quite literally, begins with documents on and about the space, exploring the genealogical traces of, as Jeff Derksen describes, “the history of use and ownership of a seemingly surplus space,” and provides an intricate collage of details, from lyric to historical correspondence to the cold fact of numbers. As she writes: “stand up now, the wasteland to maintain / your houses they pull down now / stand up now // your houses they pull down / to fright poor men in town // gentry must come down / and the poor shall wear the crown [.]” Hers is not simply an uncritical description or documentary but one that speaks to the removal of various native peoples from their land for the sake of shipyards, and a long poem that does more than simply replicating information, but using that information to help shape a series of collage movements in the form of the long poem.

Vancouver and its surrounding area have long produced poets engaged with a blend of social justice and language experimentation, from recent collections by Mercedes Eng, Jeff Derksen, nikki reimer and Stephen Collis to prior works by a whole slew of writers including Michael Turner, Daphne Marlatt, Maxine Gadd, Reg Johanson, Marie AnnHarte Baker, Roy Miki, Roger Farr and Dorothy Trujillo Lusk, with much of this and similar kinds of engagements around the Kootenay School of Writers collective. In From the Poplars, Cecily Nicholson engages a space that might not be commonly known of outside of the immediate area of New Westminster, and questions the entire idea of ownership upon a physical space, or even a population, as she writes: “once harvest was done / harvest done worried some / worried men sing a worried song // songs common in the red humming / their whole lives prayer or persons likely to / become property spreading blacktop [.]” Or further on, where she writes:

prices will please the highest bidder. the purchaser shall be
entitled

and time shall be of the essence of the contract

when the cable snaps

Purchase From the Poplars HERE.