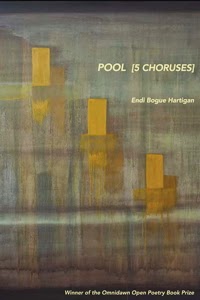 Granularity and the chorus

Portland, Oregon poet Endi Bogue Hartigan’s second trade poetry collection, Pool [5 choruses], winner of the Omnidawn Open competition, is constructed out of the idea of simultaneousness, both in speech and being, as an exploration into the polyphonic lyric multitude. Her poems embrace multiple voices and perspectives that works to overlap, even as the book is constructed in a fairly linear fashion, making her explorations less about overlap per se than about threads that wrap in, around and through each other like water. In the final section of the abecedarian poem “anniversaries walking,” she loops back around, her twenty-seventh section titled the same as the first, returning back to “a.,” as she writes: “Simultaneous to her, the thought of her in real time—which even she can think / about—sideways, through a flute.” The second section of the same poem reads:

Referencing the anniversary of 9/11 (among other anniversaries), the poem subtitle announces that the piece is meant “to be read by 27 voices,” something I do hope has been performed, looping and stretching in such a compact overlap of simultaneous voice. If not everything heard can be understood, where does meaning go, or is the effect of the choral collage and mix of voices the goal? In a short interview included in the press release, she seems to respond to the question, opening her response with a discussion of her poem “chorus inventing lilies”:

With each of my entries in this poem, I found myself adding these short, parceled-out, elucidations and commands, and I realized it was a different voice. The chorus kind of talked back. Overall, I think one of the most challenging and surprising aspects of writing this book was that it was a kind of tug of conscience for me to enter from a new place formally with each poem, in order to necessarily do my hearing as well as what I didn’t hear justice. The choral gave me new ways in where voices emerge and differentiate and interstice and expand, but I didn’t want its force to be the force of a crowd. I had to find a way for language to be able to reference actual lives in the context of what is not referenced too, to mention things unspeakably embedded and complex in actual lives, with actual camellia bushes and layoffs and children and hopes and the 9/11 “anniversary,” which I didn’t want to merely report in stillness or claim an unfounded authority of report. I felt the danger of both over-speaking and under-speaking, and as a result the particular entrance point for lyric felt like a very tenuous easily slipping place; there is a series of poems necklaced throughout the book that explore this idea of “slippage,” which were especially challenging to write because I was writing at and from that point at the same time. I think one reason the chorus allowed me to navigate here is that although the chorus is active, it is distinct from the actors. The chorus is there beside the actors while in the same viewer space.

The five sections that make up her Pool [5 choruses]—“gallop,” “lily tally,” “Lola, backstage,” “yellow yellow yellow” and “office of water”—are built of poems that extend and pull apart the line, composing lengthy linear stretches in the smallest of spaces, writing poems both choral as in the multiple/polyvocal, and in the elegantly lyric. As she writes in the poem “Flurry series,” subtitled “4 choruses”: “The tree transferred choruses / from eaves to branches—from branches to eaves— / in their slippers and gowns, in their suits and linings and cowboy boot / dresses, in prints and in tresses and costumed sounds—[.]” What appeals most about these poems is how much manages to happen in such a small sequence of moments, moving one to the next to the next, each one sending ripples that continue for miles. Where Hartigan shines is in the lyric disjunction, composing poems that work to explore the seriousness of real events and the weight of how the world sometimes happens to be, all while managing a lightness of line and a spark of phrasing that bounces. (April 2014)