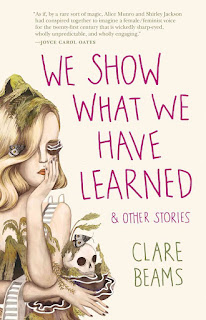 Clare Beams merges literal and historical elements with magical images in her short story collection, We Show What We Have Learned and Other Stories. Each story is distinctly different in character and topic, but the stories are tied together with the underlying theme of the mysterious effects people have on one another. Not only does Beams provide odd, spellbinding details that bring her stories to life, but she also pulls in subtle social commentary of body image, gun violence and the effects of war on soldiers and their loved ones, creating haunting illuminations by the end of each story.
On the surface, the stories appear quaint in tone. In “Hourglass”, a young girl describes her mother telling her future headmaster, “We would just love to see Melony blossom, that’s all”, making the headmaster’s life changing, body image alterations appear harmless for the majority of the story. A man’s professional life in “World’s End” reads like a fairy tale: “He shaped land, not buildings: he was the builder of landscapes, one of the first of his kind in New York, although this was the 1880s and Olmsted had already carved out Central Park.” In “The Drop”, a woman, preparing to marry a man deeply troubled as he returns from war, ignorantly hisses, “If I have to wear it I will die” when she sees the parachute her future husband wants her to wear to the wedding. Readers have no idea the discomfort they are about to endure as the stories more forward. As I read on, I was pulled into Beams’ homey prose. She emphasizes what it truly means to be human by gearing into each character’s private moments in a completely riveting manner that creates a one-on-one feeling between character and reader.

What truly captivated me was how Beams uses pacing to pull out the mysterious elements that make each story truly creepy and compelling. The structure creates gripping plots, enthralling description and poignant lines, as each story becomes increasingly engaged with reality-bending images that build tension. Moving through the stories, they grew wilder in their twists and turns until reaching what I consider the heart of the collection, “We Show What We Have Learned”. The description of body parts coming off the teacher as she gives everything she can to her students starts slowly with her losing an ear as she teaches history and a student asks mocking questions. The ending lines, which reflect how much the teacher had given them throughout the year, read, “You would not have seen a difference to look at us, but we had changed, were changing as our seams learned how to loosen. We were becoming divisible. We would come to learn that in this way, Mrs. Swenson had prepared us. For the future is gated and there are tolls to be paid.” In the same moment, everyone in the classroom begins to become physically undone—“it came first to the pristine joints of our vertebrae”—as their joints let go and body parts fall off. The language and tone of the story is extremely matter-of-fact and gripping, as the children have to show the effect their teacher has had on them by demonstrating how they too have learned to come apart. (October 2016)

Purchase We Show What We Have Learned and Other Stories HERE.

Reviewer bio: Maria Pane is an emerging writer studying fiction writing and children's literature at the University of Pittsburgh.