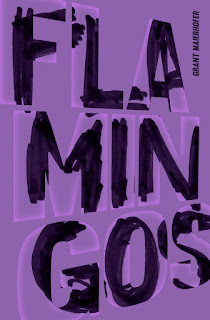 Grant Maierhofer’s Flamingos rings with electricity. In his iteration of what a novel should be, Maierhofer dives into the lives of his characters, revealing their inner nature. Within this story, a host of characters have been subject to therapy, rehab, and hospitalizations for various, yet unknown, reasons – this book is their journalistic musings of life in the current moment. The characters are singular, vibrant in the details we are given of their lives, and more so the inner workings of their minds and thoughts. The ambiguity of their situations transcends our view of the conventional novel; it transposes upon us a kind of diary – something so intimate and personal it shakes us, as readers, down to our very cores.
A common theme among the characters is the displeasure of integrating into society, and pressures pressed upon them. The demands from a culture that does not cater to these characters draws upon the unnerving fear of never entirely belonging: “What you might do as a young human animal is fail, or succeed. Neither matters, but both have their time and place above a slow-poured cup of gas station brittle” (45).  Nihilistic in ways, Maierhofer perpetuates the idea that everything these characters do or have done might not really matter. With undercurrents of intelligence mixed with a power-driven desire to make sense of it all, Maierhofer’s characters reflect the inner battles that plague many readers.

Brewing with passion, Maierhofer’s characters are very much alive in a world below the surface. Informative and clinical at times, the testimonials of these characters are emotionally charged, leaving the reader, more often than not, winded by the authenticity. It is a book that we can relate to in ways we wouldn’t expect – the reader feels striking empathy for these characters rather than sympathy (a distinction highly important in the function of this novel). Poetic in nature, bracingly raw and vulnerable, Maierhofer’s words cut close to home. Sentences spoken by certain characters such as “Your history upended you” (113), shows this tangible relatability we feel as readers and even more so as human beings. These characters face their past and in their contemplation must come to terms with unpleasant periods of time they have experienced.  Traveling deeper into these characters’ lives, we realize the depth and vitality of each – it becomes a task of reading each sentence in earnest, and rereading with dawning recognition. As readers, we become privy to information, expressive fragments of these characters’ lives – sentences they felt were necessary or important enough to write down. Grant Maierhofer strips down the conventional novel, and presents his characters to the reader, in the most raw, relatable, and shocking way. (December 2016)

Reviewer bio: Morgan Plessner has a B.A. in English from the University of New Hampshire. She is currently working on an M.F.A in Poetry at UNH, while drinking coffee and dreaming of the desert.