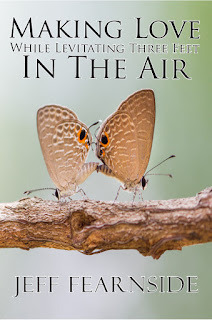 
Jeff Fearnside’s Making Love While Levitating Three Feet in the Air, and Other Stories of Flight is full of protagonists busting out of oppressive predicaments. Kids rebel against their parents. Their liberation takes place outdoors and is short-lived but transformative: the little boy in “Nuclear Toughskins” cuts the legs off his new jeans; John, in “Every Living Thing That Moves” evades his father’s abuse and falls into a relationship with his pastor’s daughter; and Ryan, in “Maps & Compasses,” pursues a buck in the wilderness.
More complex than their adolescent peers, Fearnside’s female protagonists break free of the fictions that have paralyzed their lives. Elly, in “She Was a Winter,” and George’s wife, in “A Story of My Very Own,” ruminate on their relationships with their mothers. Haunted by the Cathars, a twelfth-century heretical sect, Elly questions wake and burial rituals while George’s wife finally lets go of the marriage she left years ago. In contrast, Minnie in, “Making Love While Levitating Three Feet in the Air,” focuses on the bodily life; and schemes to satisfy her boyfriend while still retaining her financial independence.
The sad truth is that we are sometimes superficial, and Fearnside probes the superficiality of our most intimate relationships in “Stars” and “Little Murders.” Steve and his wife flee the big city of Boise for a camping trip. Exuberant to off and away, Steve forgets about his wife and continues hiking, onward and upward. Emotionally depleted by what he perceives as a predatory career, a banker falls in love. Neither story is formulaic. Both provide insight into and compassion for seemingly unlikable characters and behaviors.
Ostensibly hopeless situations close in on the heroes of “Wing Walking” and “Going for Broke.” In the former, a baggage handler at the Spokane Airport endures one mishap after another. In the latter, a farm boy in Wapato suffers the intense harassment that often accompanies bigotry as he and his family are dislocated to a Japanese internment camp. Horse stalls, box cars and barracks behind barbed wire comprise a situation hard to bust out of. But these are settings in which an Issei father coaches his son, day in and day out, in the crazy game of baseball.
By inverting reality as we know it, Fearnside uses fables to question what it is that prevents us from living fully. A man doing his laundry in a laundromat notices that the woman across from him is dressing in “Clean.” Aliens with cat heads punish those guilty of torturing or abusing cats in “The Cat People.” Relocating after a failed relationship, a man tries to start over in “The Great Silver Cactus of Driggs, Idaho.”  Of course, none of the thirteen stories are really about what you think they are. Read them. At the end of each one, the story will subtly shift and you will realize that it was about something else all along. (December 2016)

Purchase Making Love While Levitating Three Feet in the Air, and Other Stories of Flight HERE.