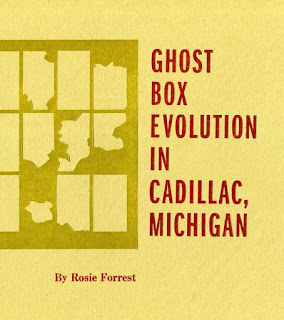 Rosie Forrest’s stories are fairy tales.  Minus the fairy godmothers, minus the happily ever after, minus the magic.The stories in Ghost Box Evolution in Cadillac, Michigan—winner of the Ninth Annual Rose Metal Press Short Short Chapbook Contest—align themselves more with the danger in those original, adult fairy tales. We find young protagonists in less than ideal situations.  We find absent parents and emotionally absent parents.  We feel a sense of danger as the characters venture on their journeys in the physical world or in their own minds.  We too “were raised to worry about the outside” like the children in “He Showed Us A Road.”  We hope the narrator of “Bless This Home” will heed her mother’s warnings and stay away from the bearded man’s cabin, although we know she won’t, although we want to see what happens if she doesn’t.

While most of the shorts create a sense of dread for the reader, they also create a sense of wonder, rooted in Forrest’s precise language and vivid worlds.  So maybe I was wrong about the magic.  Forrest masters the short with openings that spark us: “On Wednesdays they played dead because Jesse had a basement that was good for morbid games.” She makes the worlds real and full and populates them with real and full characters. In “We’ll Go No More A-Roving,” two girls inspect an abandoned church where “the four parking spaces behind the building are five white lines and nothing else.”  As the children in “He Showed Us A Road” escape, they pass, “a scrap of tire, an old plaid shirt, what remained of Mr. Lipscomb’s property after the fire, the dip in the asphalt where an arm of gravel collected…”  In “Where We Off To, Lulu Bee?” we feel every pinhole of a daughter’s embarrassment as her mother rides a toy horse they’re both too old for.

The hardest and often best part about flash fiction, about all literature, is the ending, and Forrest doesn’t disappoint.  Instead of a moral at the end of these stories, she twists our expectations, leaving us with a something we often can’t quite place.  A something that moves in our stomachs just the right way. (August 2015)