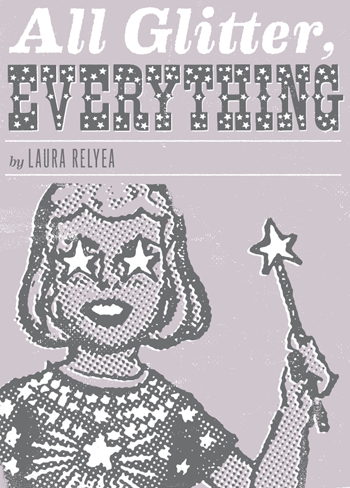 In the tongue-in-cheek disclaimer at the beginning of the book, Laura Relyea states that “Names have all been changed to Kesha, characters never are Kesha.”  This literary sleight-of-hand is not just a gimmick; it also foreshadows the transformative effect of Ke$ha.

The poems are reminiscent of Lauren Ireland’s Dear Lil Wayne from Magic Helicopter Press, where each poem is an address to Lil Wayne that Ireland sent him in 2010 while he was incarcerated (spoiler alert: he never wrote back).  In All Glitter, Everything, the book’s namesake is not a rapper who often rhymes fuck with fuck; instead Relyea turns to the pop queen of auto-tuned party anthems with lyrics like “I’m talkin’ bout - everybody getting crunk, crunk/Boys tryna touch my junk, junk.”  Often synonymous with the most condemned aspects of pop music, including repetitive beats, empty lyrics, and the ubiquitous auto-tune, Ke$ha resists such easy categorization; in fact, she considers the dollar sign in her name an ironic gesture and, according to an interview in Time, scored a 1500 on the SAT.
Like Ke$ha, Relyea could be accused of creating work that is ephemeral, that is all surface.  However, like the best writing coming from the hybrid prose poetry genre, these poems throb with the emotional now.  Each poem searches and celebrates and aches and shines, all reveling in the promise of glitter: a transcending of the mundane, a swelling of possibilities, a real fucking good time.


Ke$ha, let’s have a staycation and eat potato chips and drink wine coolers and watch reruns of Who’s the Boss.  Let’s throw a parade down Highland, we’ll wear nothing but stilettos and glitter and glow-in-the-dark paint.  Ke$ha let’s get so drunk that we won’t be able to find any door knobs. Let’s get so gone that tomorrow when we do it again we will relive a distant memory.

These poems take place in bars and backyards, BBQ joints and honky tonks, college campuses and professional conferences.  Ke$ha, as the disclaimer promises, is never actually Ke$ha but often seems to stand in for the speaker’s friends: confidantes, party-goers, old childhood friends.  Unlike the real Ke$ha, though, Relyea also examines what we do when the glitter fades and the party is over: “A giant neon sparkler burns in shining pursuit of Ke$ha’s fingertips. I wonder what Ke$ha does when the sparklers lose their shine.”  The speaker goes through a divorce; the speaker questions the emptiness in her life.

Relyea even allows us one heart-rending full-stop, the language no longer effusive and sprawling but terse, declarative:

In the end, no matter where we go or who we wake up with, Ke$ha is there: support, strength, sanctuary.  For a moment, we were all Ke$ha, and Ke$ha, bright lodestar, was our battered yet still-beating heart.

Ke$ha brims with ambition. It rolls and boils over the sides of her kitten-glittered dreams. Ke$ha, please be an unstoppable force – a volcano, a tsunami, an avalanche – pick your element, Ke$ha. Look for solutions everywhere. Solve mathematical proofs in your sleep.

Purchase All Glitter, Everything HERE.

Reviewer bio: Melissa Reddish is the author of The Distance Between Us (Red Bird Chapbooks, 2013) and My Father is an Angry Storm Cloud: Collected Stories (Tailwinds Press, forthcoming 2015).  Her stories, poems, and reviews have appeared in print and online journals.  She teaches and directs the Honors Program at Wor-Wic Community College on the Eastern Shore of Maryland.  When not writing or teaching, she likes to do stereotypical Eastern Shore things, like eat crabs smothered in Old Bay and take her Black Lab for long walks by the river.