Review of Nicelle Davis & Cheryl Gross’ IN THE CIRCUS OF YOU 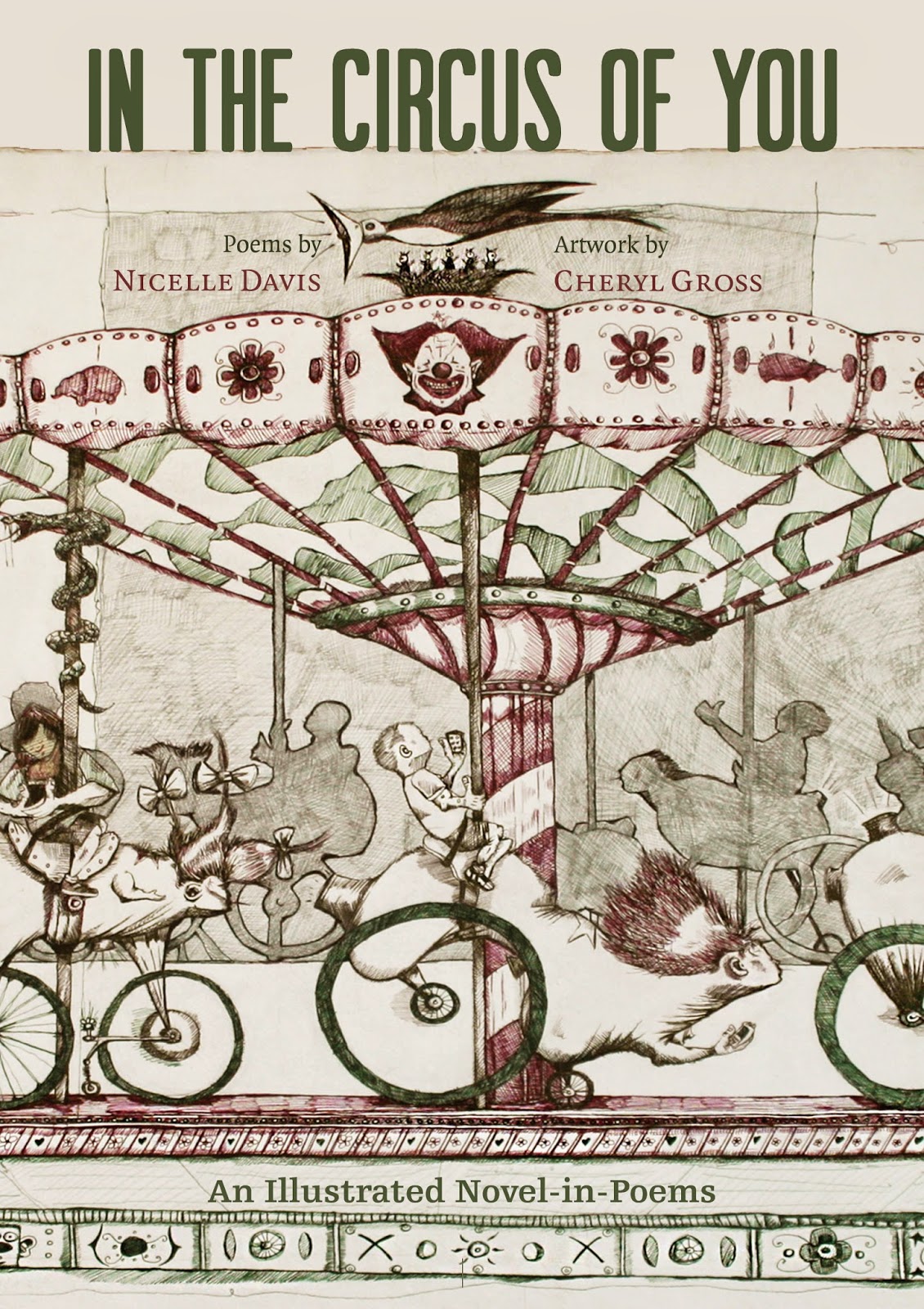 In elementary school, I anticipated my school’s annual book fair.  I didn’t have my eyes set on The Babysitters Club series or the sticker collection books or even the new Magic Eye calendars.  I was set on the Scary Stories to Tell in the Dark series, written by Alvin Schwartz and illustrated by Steve Gammell.  They were full of urban legends and folktales, creepy and ironic with a hint of dark humor.  The accompanying drawings often had the same humor, but there was a darkness that always unnerved me.  The bodies were disproportioned.  Everything was dripping or hairy, those stray hairs in just the wrong place.
I hadn’t thought about the series in maybe decades until I read Rose Metal Press’ latest release In the Circus of You: An Illustrated Novel-in-Poems.  Each poem by Nicelle Davis has an accompanying sketch by Cheryl Gross.  While each also has a spark of humor, the book is dark.  Rather than urban legend, poems and illustrations focus on the circus, on freaks and clowns.  The circus is a metaphor for adult fears: the end of a marriage, the trials of motherhood, the struggles of knowing and being yourself.
Davis’ poems take many forms, from traditional stanza to prose poem to hourglass shaped poems.  They seek to disturb and surprise and are at their most successful when the surprise is visceral and grounded.  In “On It’s Haunches,” the speaker places her head inside a poodle’s mouth (not a lion’s) and watches as a neighborhood boy is tricked into eating worms:  “…What are you/looking at? He asks me. Kicks the dog. Yelp folds into bite./My face is a circle of puncture. The boy calls me, Freak.”   In the found poem “My Understanding of Love from a Man—or—The Rubber Boy (born the same year as I, 1979),” we’re told the story of famous sideshow contortionist who, “Dislocates hips and shoulders./Carefully rearranges ribs. Drops heart/below sternum. So an audience can/watch it beating.”
Gross’ sketches interpret the poems literally, while adding an extra level of the grotesque.  The characters are bloated.  The skin is full of folds.  Spines are coiled and hooked.  Body parts are replaced by wheels.
While the book is full of imagination and surprise, the extended metaphor was sometimes too much for this reader, especially when I was pulled too far from the concrete.  There were times when I wanted more of the real, which might’ve been more disturbing than the figurative clowns or dead birds.  But the stories of famous sideshow freaks and their renderings in both verse and drawing kept this scary story enthusiast turning the pages.  (March 2015)

Purchase In the Circus of You HERE.