Review of Josh Olsen's SUCH A GOOD BOY 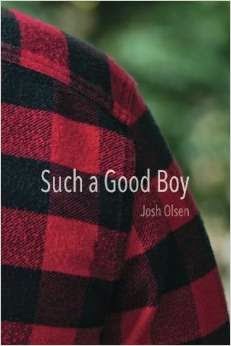 Olsen’s Such a Good Boy is a solid collection of flash fiction. Not only are these deeply personal short pieces complete in and of themselves, they also fit together as an autobiographically themed collection. Olson has an eye for the ostensibly insignificant, which he uses to strip down the finer details of human connection and abstract communication. This is particularly evident in the story “Then I…” where the narrator becomes obsessed by the prospect of connecting with a previous owner/reader of Richard Pryor’s memoir “Pryor Convictions.” What stood out most about the book for this narrator, more than anything else, wasn’t even a part of the text. It was an arrow. A simple, black arrow that some previous reader had scribbled in the margins that pointed to the one and only underlined sentence in the entire book: “Then I stabbed the white motherfucker in the back six or seven times.” (From “Then I…” p.10)

Through childhood reminiscences, parental confusion, crude imaginings and unhealthy fantasies, Olson pours himself onto the page with an unabashed honesty. He pokes at the absurdity of life by mercilessly assassinating his own character, using longstanding personal failings and hypocrisy as a paradigm for the larger issues at hand. And they are issues he is not necessarily interested in resolving as he makes comment on the pain of loss, inadequacy, sickness and death.

“I would move in with my maternal grandparents, my mom, with my two sisters,
would rent a small, one bedroom apartment, and my brother would remain in
the custody of his dad, the man I would come to demonize in my memories and
poems for lording over us with his brooding, pessimistic nature and
unpredictable fits of blind rage.
But now, separated by time and geography, I often find myself thinking, who
could blame him?
An unrepentantly unfaithful wife.
A spoiled, adopted son who was ashamed to call him dad.
He should have been the fucking poet of the family.
And, who knows, maybe he was.”

A substantial portion of these stories are told through the narrator's imagination. Olson lets the lines between reality bleed into the protagonist’s imagined reactions and fantasised outcomes. It is this layered form of story building that makes these smoke-long tales work so well. In some cases, with only a mere paragraph, he covers a multitude of possibilities by simply looking at an object or day-to-day situation from various, unexpected angles:

“I wished that he would turn and acknowledge me, so I could give up my game, walk back to the car, and go home. But he didn’t. I put my left hand in the pocket of my flannel jacket and contorted it into the shape of a pistol. It was only my hand, but the adrenaline coursed through my body.”

For covering such heavy topics, Such a Good Boy never feels like too much of a weighty read. Olson is sometimes bluntly sarcastic almost to the point of slapstick, sometimes cynically sharp and often poignant with his cutting wit. This book is not light, but the tragic elements are lightened by his gift for pinpointing the funny aspects of misfortune. There is a resounding sadness in his prose, along with a sense of injustice and anger which punctuates his humorous approach to storytelling. Essentially this is a collection that concerns itself with how people interact with each other. This examination of human behaviour is told through several underlying themes. Nostalgia, obsession, responsibility, heroes and family are all dissected and reassembled as Olson illuminates the frailty of our complicated species. Here is an author who realises that each word has to justify itself within its own sentence. Furthermore, he recognises that each sentence ought to stand alone while strengthening its predecessors as well as its descendants. Such a Good Boy is an example of what Flash Fiction can and should be: precise in its execution, full of purposeful substance, and, most importantly, sure to provoke various types of emotional response in its reader. (September 2014)

Purchase Such a Good Boy HERE.