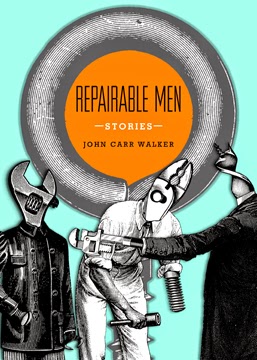 In his debut collection, Repairable Men, John Carr Walker offers ten portraits of modern manhood. Presented in another beautifully designed book from Sunnyoutside Press, Walker’s men are imperfect, and their stoic exteriors often mask anxieties and vulnerabilities they themselves are struggling to understand. These are not men in touch with their feelings; rather, they stumble through their days, blindly wrestling their demons, battles that often leave them battered, confused, yet sometimes, closer to grace.
Relationships provide the touchstones of many of these stories. What better mirror does a man possess than the eyes of those he loves—or doesn’t love? The book opens with “Ain’t It Pretty,” a tale of how a man’s temper can turn him into an exile. “The Atlas Show” brings us a father and son forging a new territory after their shared dream has died. “Retreat” features a husband and wife who’ve grown apart after heartbreak and the loneliness that surrounds them when they need to make one of their lives’ most important decisions. Many of Walker’s men are haunted by their pasts. Their scars are hidden yet keenly felt. In this passage, a man attempting to reconcile with his brother recalls their upbringing:

“I can almost hear my mother’s voice. Reg and me, coming to the door caked in mud, open sores scabbed with mud, mud gelling in our hair and caking the grooves of our hands—Mom yelled but Dad was the punisher. Afterward, she would enter our room with the softest voice and talk about all the complicated ways he loved us.”

Complicated love—one finds it in abundance in these stories. Or perhaps the love is less complicated than its expressions, the imperfect words we offer one another, the gestures too little or too late.

One of the rewards of reviewing is the discovery of new voices. Walker’s style is solid and his focus is keen. He peels back layers in a series of well-paced and precise observations, and by the end of many of these stories, we feel as if we’ve been on a journey of discovery, a journey not always comfortable but one that has led his characters closer to some kind of truth. Consider this final paragraph of “Candelario,” a story that examines how easy it is for a slighted man to turn to meanness and cruelty—and also how the grudges we hold can, if we’re not careful, end up defining us.

“I’d been through that before, once, the year before Candelario first came to us. It poured on the crop and we almost lost our vineyard. What I didn’t know—still to this day don’t know—is if Candelario moved the world to protect or attack us? The crop stayed dry that year he danced over the fields and he hasn’t returned since. Years later, I took over the vineyard from my father and have two boys of my own. I wonder, sometimes, if by some miracle he’ll come back to pick my harvest. But why would he? He’s always known there are no repairable men.”

“There are no repairable men”—this is the question that resonates through Wallace’s debut. True, his characters are damaged, too proud, too solitary, their deepest wounds self-inflicted. Yet most of his men are still searching, still asking questions, and in this light, I think, yes, perhaps they can still fix themselves. (October 2014)

Reviewer bio: Curtis Smith's latest book is Beasts and Men, a story collection from Press 53. In early 2015, Dock Street Press will release Communion, his next essay collection. In 2016, Aqueous Books will publish his next novel, Lovepain.