Having Long Tended to Delight in Confusion as Entanglements Unravel: Review of Jessica Piazza’s INTERROBANG 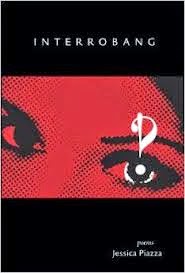 Painful and totally lacking in grace to the person undergoing it, the individuation process is a necessity nonetheless; it’s inevitable, anyhow, and the only way out, or through, is to keep on keeping on, hopefully discovering what (if not who) we are, along the way.  This phase of life happens to just about everyone sooner or later, but that never seems to reassure anybody: instead it dwarfs us in our own commonness, in the difficulty of not knowing where we are, and where we’re going – or maybe of knowing all too well.  Altogether the experience can make the lone soul feel like a dim speck in the vastness of intergalactic space.  Jessica Piazza’s first collection Interrobang deals with the fragmentation of identity head-on, and makes a virtue of it, by observing a prescribed, arbitrary set of formal strictures that serves to limit, direct and focus the author’s energies.  It’s an enjoyable read.
The concluding couplet from the book’s opening poem “Melophobia” evokes an open condition that amounts to a dilemma:

For all their rousing rhythm, these lines propose the composition of the book as a problem, the spiritual predicament its author had to write her way out of – a semiconscious self-identification with nature that’s known as the pathetic fallacy, a refuge from one’s fellow human beings, untenable.  Other poems restate this difficulty as a systemic flaw in perception:

Like me, the tree’s worst weakness is its hollow.  (“Asthenophobia”)

When human relationships enter the picture, the players possess the chameleon karma of anyplace they happen to be at the moment, as in “Kopophobia,” where a dying romance between two tourists blends in with the ruins they’re visiting as sightseers:

The bleak faces of burned-through tenements
were testament to how destruction does
not mean the thing destroyed was beautiful
before.

The metaphor is belabored, but yields a sentiment that’s expressed with an apt clarity, despite being obscured by the verbiage that needlessly crowds it out:

I never said
I loved that broken way you looked when things
went wrong. I should have.

In these lines, the present realization of the writer, within the fiction of the poem, is at last differentiated from a former self and its way of experiencing the world.
The beginnings of true separateness manifest themselves sharply in Interrobang, within moments, plain or ironic, that attempt to distinguish the self from the other, and past selves from present ones.  A few examples:

And didn’t we / expect it, eking out animatronic / epochs on the sofa?  (“Automatonophilia”)

You left because you wanted to.  (“Heresyphilia”)

The question of identity is formulated as a nexus of relations, centered around the delicate matter of inheritance and ownership, in “Patriophobia,” whose submerged terza rima, with its chainlike sequence of rhymed lines, evokes the theme of interdependency:

Still, her mother’s voice: But you

do own this land. And maybe it’s denial
how she refuses it, won’t bend to claim
a side or plant a flag. It’s been awhile

since she’s owned anything. Even her name:
her father’s. Her face, his. Like him, she’s not
inclined to argue over heavy things.

Though it lacks sufficient distance between an authorial voice and its object, this last excerpt is notable for portraying a complex of relationships in a little space, and for locating the capability of discernment in an individuating self that stands, however immobile, at the center of things.
The rhythm of Interrobang is a loose iambic stress pattern, in tetrameter or pentameter, updated by a post-Hip-Hop speech concept and steeped in a poetics derived from New Formalist constructs and assumptions.  This author’s work is beginning to come into its own much as the subject of the poems starts to attain her own measure of self-knowledge by passing unaccompanied through a gray area, an ambiguous zone, and stating the experience clearly.  “Achluophilia” achieves such clarity in monosyllabic Sapphics:

The minutes fly in the day. At night we
watch each other, watching. I sleep. I dream his
dreams of a moving

darkness. In my dreams my own eyes half open,
watching him, asleep, and I see him sleeping,
seeing, moving. Night, when I’m covered with his
eyes, and his eyes won’t

cover him. It’s night, and I can’t distinguish
sleep from sight.

As lovers whose eye-beams intertwine by day peer into the darkness to make out each other’s glances at night, the poet’s psyche and her intellect yearn together to burst the confined spaces of a superimposed prosody.
At last, in the sole prolonged moment of Interrobang that provides the reader with satisfaction and relief, a sonnet from the sequence entitled “The Prolific” (referencing Auden and Blake, one imagines) depicts identity as a function of perception – an upgrade of George Berkeley’s postulate that esse est percipi, “to be is to be perceived.”  Such a way of delimiting the concept of individuality doesn’t palliate the pain of fragmented relationships, however; and yet this poem offers the only resolution in the book which rings true:

He couldn’t love me—I was not complete
the way his wishful eye completed me,
subtracting toward an ideal sum. I’d see
myself lost part by part: white neck, large feet,
wild hair—erased—a disappearing hand
pressed lightly to transparent collarbones.
He wished for tides, forgot they cause sea stones
to wane and yield. But glass worn down to sand,
if not as beautiful, is also not
as delicate. I couldn’t disappear
beneath his blink. Instead I found the spot
on 23rd where, when the sun struck clear
glass buildings, streets appeared to multiply.
Then a thousand of me walked away.

It shouldn’t need stating that this poem’s achievement on a thematic level is due to its technical success.  As a modified Petrarchan / English sonnet “He couldn’t love me” rocks its conventionality with brilliance and restraint.
The set shapes and inflexible regularity of verse in the American New Critical and English Movement traditions offer a narrowness of focus that can prove useful during periods of uncertainty.  Even so, the undeniable fact is that a sheer weight of associations with prior content has accrued to strict meters, rhythms, stanzas, and rhymes over seven centuries in the development of poetry in English – and for better or worse this ponderous antiquarian quality precludes any approach to these means other than an occasional, passing, allusive use of them, as one set of technical tropes among the many others now at our disposal, at least if our work is going to mean anything to readers beyond a simulacrum of this or that abstruse vestige of lapsed cultural paradigms.  And yet no one is going to write poetry that affects a contemporary reader without at the same time assimilating these bygone methods: interpreting the grand tradition via its prosodic traces is a significant part of every poet’s responsibility. With Interrobang, Jessica Piazza steps up to that task in good form. (August 2013)