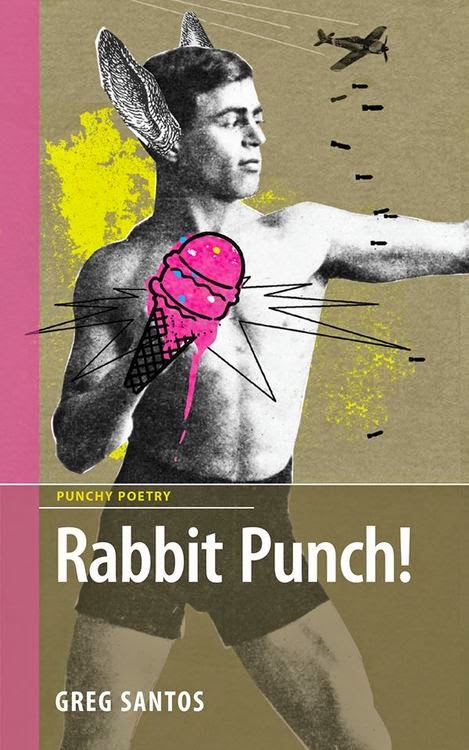 Help is on the way for the Anglophone reader in a global poetry world.  Rabbit Punch!, the second collection by Greg Santos, offers an admirable finesse to the reader who craves good verse.
In an oversaturated poetry “market” whose only reward, arguably, is bragging rights, and in an age of enforced specialization, in which most people who write poems are denied much attention, it might be worth a moment to acknowledge the fact that despite the pretensions to spiritual authority which often prevail among poets, not all of them escape the temptation to employ techniques of self-promotion that – depending on who you ask, of course – collectively go by the derisive term “careerism.”  The question whether this is a matter of degree or kind is probably best settled on a case-by-case basis: but either way, it’s still true (for example) that frequently in debut poetry collections the names of the authors’ grad school professors appear everywhere in the book – below blurbs on the back cover, in “personal” acknowledgements on the flyleaf, on dedication pages, on copyright pages as journal or press editors, and so on – everywhere, in short, but in a poem, where presumably a poet simply means it.  And it isn’t that one doesn’t understand why – but also, it kind of is….  By contrast, Greg Santos’ candor in Rabbit Punch! is refreshing.  Alongside touching dedications to his family (“To my wife, Maryn, and my children, Rosemary and Arthur, you are my muses.  I love you”), we read this:

Rabbit Punch! is dedicated in memory to Paul Violi, whose humor and vibrant spirit helped make my time at Columbia and The New School a life-changing experience.  Paul’s laughter and our conversations are sorely missed.

Not only that, but the dedication page of the book reads: “In memory of Paul Violi.”  And what’s more, in case there was any doubt, we have this lovely poem:
We’re all Just Passing Strange
for Paul Violi

New York is a little to the left of the centre of the universe.
Everything is happening and I’m so there. Where?
It isn’t important to know how but to just do things.

They all make me want to write!
Admittedly, I don’t like it when it’s just poetry thick.
It needs to be varied.

Suffering from the morning of the poem.
He felt like God writing out the bible.
He connected with their mind set.

He was always “around.”
He really lived like a poet.
He was pretty much a ghost.

As readers, we appreciate such plainness (which is a complexity, as anyone knows who’s ever tried it), because it leaves no doubt as to the poet’s commitment: plainness trumps all merely erudite senses of the supposedly high-minded engagé author.  And it’s impossible to miss the crucial difference between the student and teacher, signaled in this poem only by orthography, in the first line, where the Canadian spelling “centre” is used, in a poem dedicated to a man from Brooklyn.
Santos’ poems aren’t just plain, they’re groovy too.  In a few pieces in Rabbit Punch! the poet misses the mark, by attempting a hi-lo sort of mélange that comes off as awkwardly programmatic.  But look what he can do when he’s on:

Zombies like the song because they can relate to it.

They nod their heads, mouths agape.

He is not an authentic zombie.

He is a live human who has appropriated the zombie name.

There is no greater zombie taboo.

Look out, Rob Zombie! Behind you!

This easy, sophisticated (not to mention hilarious) way with pop is so unusual, in any present writing at all, that it would be tough to suggest a context where Santos’s work might conveniently “fit.”  For another example, here is his interpretation of that phony type, the Great Man:

Pacing my hallways
These days I find myself
Dressed as Napoleon

I brush my teeth
Dust off my bicorn
Salute the day

My glorious
France of yore

A playfulness that makes light of the ponderous “historical figure” is delightful here, in its evasion of heavy-handedness, a valuable lesson indeed.  Over and over, it’s the enjoyment of it all that wins through in Greg Santos’ poetry.  Consider a domestic scene in the USA:

The president was on TV
and told us all to keep calm.
Nothing’s going on.

See, my wife said,
I like the president.
He’s not freaking out
like the rest of us.

I turned to my wife.
That man is not
the president,
I said, knowingly.

No sitcom, no standup has the drop on this poetry.  How often can you say that?
Rabbit Punch! has a certain understated poignancy as well – one that can’t be reduced to mere topicality, because the poet always evokes a theme out of his subject matter   Consider these lines:

Mean boys,
We do not wish you
infamy in death.

May you lie
sleepless
in your holes.

May the echoes
of your angry screams
for attention

from the bottom of wells
go unheard
for the rest of our lives.

“Mean Boys” was originally written as a response to the Virginia Tech Massacre.  But then the shootings in Norway happened.  And then the Boston Marathon bombing.  Countless other atrocities are committed by lost young men every day.  It was rewritten as a poem of defiance towards the “mean boys” of the world.

Of course, the reader recognizes that the note is disingenuous insofar as the poem is not really about or to the perpetrators of such atrocities: but rather, it’s about the condition of modern societies globally that cannot or will not address the crisis in manners and behavior of its youth, and that in fact the ones responsible are the rest of us.  Meanwhile, other poems invoke a dailiness that isn’t newsworthy, but that’s the more affecting for that:

The elm trees are making a break for it.
The sun has nowhere to go but down.
A glacier shudders.

Children whisper to their water buffalo.
Ripples on a dark lake are all that’s left of a struggle.
The dog twitches and growls in its sleep.

A spider senses a tug on its web.
The boarded up corner store has a plank missing.
She wonders briefly if she would still recognize him now.

This piece shows a rare ability to locate detail around a central sensibility that fixes it and thereby lends it significance.  Finally, there is a songlike current in Rabbit Punch! that goes right to the heart with its sheer beauty:

A little way ahead
winter is come

Do you remember
it ever being so cold?

The sky goes on
with cool indifference

Wheels of the train
fall silent

We have arrived
at the junction

All creatures
don their coats

A little way ahead
winter is come

Here, syntax slows the spoken rhythm in the mind, with a craftsmanlike handling of enjambment (“Do you remember / it ever being so cold?”), and brings on a state in which the reader may once again savor poetry for the kinds of statement it alone can make.
One gets the impression while reading this collection that its author has absorbed a way with English which is often generally associated with Manhattan – and yet upon reflection afterwards, it seems more likely that what one just read is now the English of bilingual Montreal instead, and by extension of a distinctive and powerful talent in poetry, bringing such a language forth to everyone, everywhere.  Greg Santos’ Rabbit Punch! delivers the Poem to contemporaneity at large. (April 2014)