Review of Spencer Madsen’s YOU CAN MAKE ANYTHING SAD 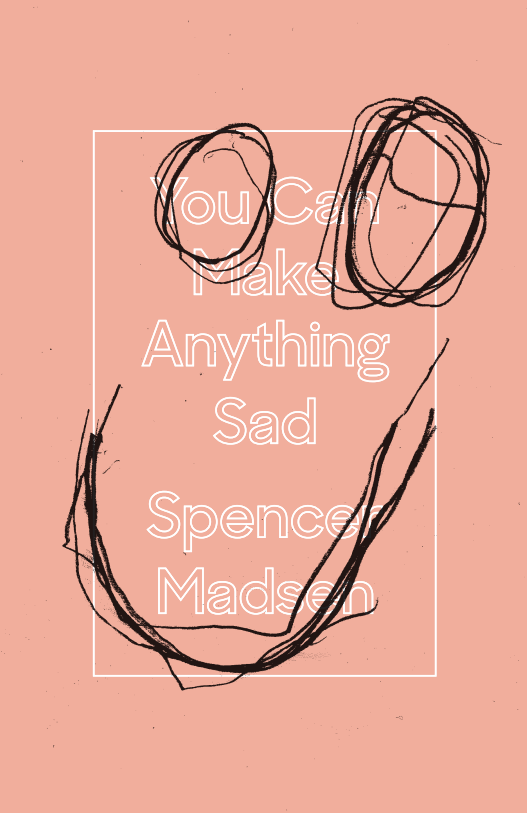 You Can Make Anything Sad

After reading Spencer Madsen’s new book “You Can Make Anything Sad,” I immediately wanted to bury it in the backyard so that my future-self could dig it up and reread it. I wanted to buy fifteen copies of the book and send it to fifteen of my closest friends. “Understanding that people are always a worse version of who they want to be is a way of loving them,” writes Madsen. “A new emotion I’m feeling is called Everyday.” “Just be patient and you’ll die eventually.” These sentences aren’t just lines in poems—they are mirrors to the dark humor we often say or think in equal parts jest, seriousness, depression, and awe of life. “You Can Make Anything Sad” knows that just because we often celebrate life communally, it doesn’t mean that we aren’t individually experiencing reality in a similarly disheartening way.

Louis C.K. feeds off this same kind of individual/communal sadness in his TV series Louie—so well, in fact, that instead of feeling sad about all the sad mess of Louie or his situation, I watch an episode and mostly feel happy. “You Can Make Anything Sad” is no different in its makeup—it’s well-crafted misery that breaks existence down into small lines and observations and anecdotes, much of which wallows in all that’s depressing and pointless. But also like Louie, Madsen’s book illuminates what’s depressing and pointless for more than just commiseration. Lines full of hope shine through the bleakness (some so blunt as “I’m always trying to be a better person”), and after reading Madsen’s book I find myself in the same emotional space that I am after watching Louie. I am happy and appreciative for all that’s great and terrible.

The mostly journal-entry prose poems in “You Can Make Anything Sad” are broken up intermittently with short scenes and lists, such as a poem titled “Ideas”, excerpted here:

A form of therapy called It doesn’t get better.

Bipartisan political party called We are all going to die.

An internship called Scared and needy.

A brand of whisky called This won’t make you a better writer.

A brand of cosmetics called Afraid of dying.

A t-shirt that says I’m not this.

While much here concerns living and dying and the fear that accompanies both, the book as a whole evokes (much like Louie) an even more specific sadness onto relationships. As the collection unfolds, the poems gain speed and clarity in the overarching story they tell, specifically about the narrator’s present relationship with Keila, but even more generally about relationships that come and go over the course of our lives. “Not enough people see through me, some people talk to me like I’m fine,” writes Madsen. “If I had a ‘type’ it would probably be grieving girls.” But Madsen also writes, “I like doing sad things because it is more productive than feeling sad things.” Here is what’s most germane; here is what’s heartening. We can indeed make anything sad, but we also need to make many things sad and humorous to value the whole of our humanity. Madsen is one of the talented folks who does the latter for us, sometimes so personably and truthfully I’m unsure whether I’m reading a self-aware version of myself saying, “I am attracted to people who look like how I want to feel” or “Sitting here in underwear and socks, what can I do.”  (April 2014)

Purchase You Can Make Anything Sad HERE.